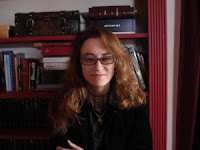 Wonder what's getting passed off as scholarship in Ivy League schools these days?

A Yale University teaching assistant and graduate student has posted her 53,000 word doctoral thesis online, entitled "Shakespeare and Dante: Demonic Agency as Literary Theory.” Margherita Viggiano was let go from her position as an art history TA and dismissed by the dean of the graduate school, Edward Barnaby, after a heated exchange of truly loony emails. The central theme to Viggiano's thesis is that "Satanic Freemasons" infiltrated the Catholic Church and arranged for priests to sexually molest children to destroy the Church from within.

According to the Ivygate website, Viggiano was apparently notorious for distributing conspiracy-laden handouts to undergraduates.

It’s unclear whether Yale has yet accepted Viggiano’s thesis; we’ve emailed Yale’s Department of Comparative Literature for comment, and will update if we hear back.

Referring to an Italian woman who had been “demonically possessed” and the Church’s efforts to save her, Viggiano writes:

"Her case is so exceptional, and the reasons of her continuing sufferings so disturbing, that one wonders why the Church hierarchy in Rome did not publicly intervene to denounce the phenomenon of Satanism in the Catholic Church. The crime of her cursing happened in Italy, performed by Italian fallen priests: therefore, it would have been logical for the Vatican, in Rome, to start a formal investigation into Satanism, looking for the causes that drive ordained priests to renegade God, renounce eternal life, and embrace the cult of Satan instead. If the hierarchy had done so, other scandalous events such as the repeated cases of pedophilia would have been better understood – and perhaps avoided – in light of the infiltration of Freemasonic elements in the Church, with an aim to discrediting the Church in the eyes of the world. As we will see in the section Freemasonry and Satanism, the abuse of children is completely in line with the ‘requirements’ of the church of Satan for its adepts. The defilement and, possibly, the ultimate sacrifice of an innocent – and children of course represent The Innocent, par excellence – is Satan’s attempt to ape the Passion of Jesus, to repeat it for his own glory and the damnation of the priests performing it. [clxxiv]"

The endnote to which “[clxxiv]” refers is, well, you’ll have to see for yourself, after the jump. (Warning: it’s disturbing.)

"[clxxiv] As we will see, Satanic Freemasonry re-enacts the Passion of our Lord quite literally, with the skinning and crucifixion of innocent victims: preferably children, who are figurae Christi. This practice has been in use since the Passion itself, two thousand years ago – but we will especially focus on a famous artistic representation of this torture dating from the Renaissance."

As for Catholic priests themselves, on the other hand:

"Far from being victim souls, many members of the Church hierarchy are often unfaithful and morally corrupted, and a number of them have betrayed God to be part of Freemasonry, which is defined by Jesus as the church of Satan on earth, active within God’s Church itself and covered by a mask of hypocritical respectability."

We’re don’t know what on earth she’s talking about. Unfortunately. At the same time, both the length and complexity of her thesis suggest that those florid emails to Edward Barnaby, her students, and her peers weren’t the result of a momentary lack of judgement, but honest and deep conviction. We’re not sure whether that makes her behavior and her beliefs less, or more, disturbing.