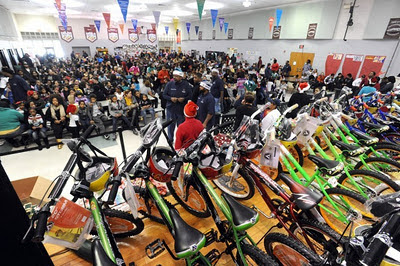 The brethren of Hiram Abiff Lodge No. 16 (Prince Hall) in Pleasantville, New Jersey held their annual Christmas party and gave away 72 bicycles and hundreds of toys. New Jersey's Prince Hall Grand Master Robert Oglesby, Sr. said between $8,000 and $10,000 worth of bicycles, toys, food and candy canes were given away on Saturday.

From the Press of Atlantic City:

The 3-year-old Egg Harbor Township resident's smile grew when Santa gave her a small container of Play-Doh, which she hugged against her chest until she became the first of 72 local children to win a bicycle, her first, at the 34th annual Hiram Abiff Lodge No. 16 Christmas party.

And even though Lugo's tiny feet did not know exactly how to maneuver the pedals on her new bicycle, her now enormous smile showed her excitement.

"I never heard about anything like this until a friend told me about it. But I love it, and she obviously loves it too," Lugo's mother Fabiola Rodriquez, 32, said while looking down at her daughter, who was inspecting her new wheels. "This is a wonderful thing they do."

The large-scale holiday tradition started under the direction of the Masonic lodge's past master Clarence Williams, who was at Saturday's event helping to hand out gifts.

"He told us he wanted to do something positive in the community for the children," said past Grand Master John Bettis, who was the president of that year's membership class. "We had 200 or 300 kids here for the first year, when we only had two bikes - one boy's bike and one girl's bike - to give away. And it just grew from there."

This year, more than 600 children - from infants to 12 year olds - flooded into the cafeteria for a chance to get one of the 72 bicycles or hundreds of other toys that were given away.