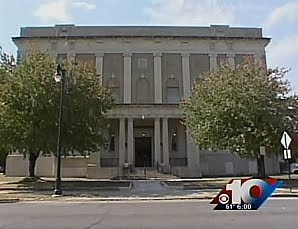 A warning worth repeating. With increased interest in Freemasonry comes unwanted side effects. And open houses can often invite folks with less than honorable intentions.

A history lesson gone wrong in a botched burglary.

That's why the four men claim they're in jail.

"They told the officers on the scene they'd been studying Masonic Templar history and they were curious to see what they could find," Terre Haute Police Detective Julia Dierdorf said.

Police said the four students used the fire escape to get on the roof of the temple, then they were able to get inside.

Once inside, police said Brookbank tried to steal a sword, sheath and sash from the secretive society.

Police believe the burglary was well-planned..

"They had been there the week prior and knew the entry door on the roof was unsecure," Detective Dierdorf said.

We broke into your building because we wanted to learn about history?

If your lodge doesn't have an alarm system, your next meeting is the time to vote for one. And if you haven't re-keyed your door locks in 30 years, you might call a locksmith.
Posted by Christopher Hodapp at Monday, October 18, 2010