French Freemasons vs. The Pope. Again. 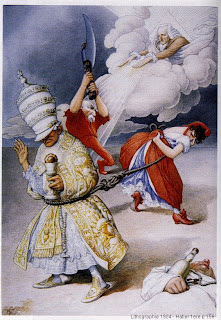 While one group of Masons keeps arguing that there's no conflict between Freemasonry and Catholicism, another group steps in to stir the pot and prove otherwise.

During his recent African trip, Pope Benedict XVI expressed his opinion that condoms were not the best means of AIDS prevention, preferring the teaching of abstinence. Doctrinally for Roman Catholicism, a proper stance I suppose, but one that calls to mind a metaphor about escaped horses and the pointless gesture of closing barn doors after they're gone. Still, not exactly what U.S. Masons would say was in their purview. But not so in France.

According to Blog Maconnique, the Grand Orient of France, the Feminine Grand Lodge of France and the French Federation of La Droit Humain responded with a statement:

These Masonic Obediences signatories express their amazement and outrage at the irresponsible position held by Pope Benedict XVI against the use of condoms as a means of AIDS prevention.

On the occasion of his first trip in Africa, Benedict XVI cannot ignore the particularly tragic devastation that this disease brings the peoples of this continent, especially among children, and are systematically raised by the WHO, UN - AIDS and all NGOs in this field.

A fair position, and one I don't disagree with. But most regular, recognized Masonic organizations would never presume to make such a public pronouncement. The Grand Orient of France, on the other hand, frequently takes public and well publicized positions on government and religious topics. France is a Catholic country, and I'd venture a guess that a substantial percentage of the Grand Orient's members are Catholics. But the GOofF is no stranger to being on the opposite side of the Vatican's views. The Grand Orient of France touts itself as being more open minded than other French grand lodges, allowing atheists to join their lodges. Yet, taking this sort of stance gets between its members and their own private beliefs.

All of which begs the question: what the hell is their fraternity doing getting involved in political and religious matters? If the United Grand Lodge of England or a US grand lodge tried making such statements, the members would run the Grand Master out of town. Regular, recognized Masons forbid mixing religion, politics and Freemasonry for a very good reason.
Written by Christopher Hodapp at 3/25/2009