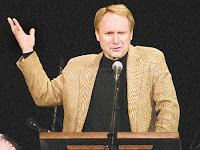 Depending on whom you ask, Dan Brown's The Da Vinci Code was either the eighth or the sixth most popular book in the English language. And then he went and blabbed to everyone who the sequel would be about (the Freemasons) and where the sequel would be set (Washington DC), and even the title (The Solomon Key). And then he didn't write it for five years. While I wouldn't know how to face the keyboard when confronted with such a challenge, he of course has, like, a brazillion dollars to lubricate his writer's block.

But he hasn't finished it yet, apparently. And his publisher and the book chains see no hope for themselves without a new Dan Brown (or a J.K. Rowling, for that matter) mega-seller to save them from certain doom. It seems that Doubleday can wait no longer, and announced that it is laying off 10% of its workforce.

...the decision was not related to the delay in the delivery of the next novel by Dan Brown, the author of The Da Vinci Code, the blockbuster best seller published in 2003. Back in 2004, Doubleday said the target release date for the next book was 2005, but Mr. Brown has yet to deliver a manuscript. Sales from even a single title — if it is as significant as The Da Vinci Code — can make a substantial difference to a publisher’s sales.

Nevertheless, "the changes we've made are quite separate from anything to do with Dan Brown," Mr. Drake said.

No pressure there, Mr. Brown. Really. None at all. But in the meantime, somebody better hide the razor blades and barbiturates in the Doubleday executive washroom.
Posted by Christopher Hodapp at Thursday, October 30, 2008