Be careful what you wish for, you may receive it

Ah, the old fortune cookie was correct. After five years of shooting my mouth off about what should be done with the Indianapolis Masonic Temple, I was officially elected as a voting member of the Temple Board last night. The 100th anniversary of the building is fast approaching, and much work needs to be done.

With four lodge rooms, four social rooms, two ballroom/dining rooms, plus a floor for the Knights Templar Commandery, the Royal Arch Chapter and the Cryptic Council, one full kitchen, two other food preparation areas, and a 1000 seat auditorium, the building has incredible potential. 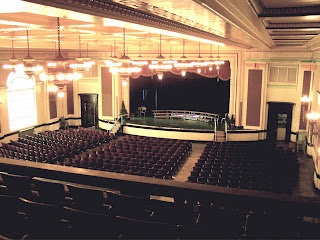 The auditorium itself has been opened to the public for music and dramatic programs in the last two years, but is in need of major work. With luck and a lot of work, maybe that will start to happen.

The downtown Feast of St. John dinner was held last night,hosted by Wayne Guthrie Lodge. Close to 80 brethren were in attendance, and an outstanding time was had by all.