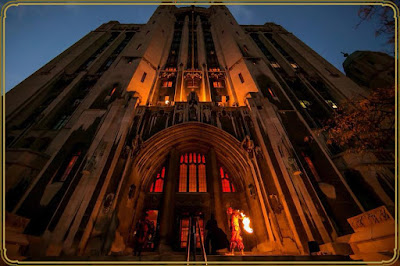 Every October since 2011, the massive Detroit Masonic Temple has been turned over to the ever expanding Halloween bash known as Theatre Bizarre. This type of massive production defies adequate description.

Theatre Bizarre is a giant, surreal entertainment extravaganza that essentially takes over most of the twelve-story fraternal tower of the Detroit Temple each October. Spread across eight of the sprawling building's levels, each lodge room, ballroom, and public area becomes a venue for a wild carnival atmosphere that combines theatre, burlesque, haunted house, circus sideshows, tattoo artists, punk bands, masquerade balls and other "immersive events." This is all about audience participation on a grand scale, and the organizers take advantage of a huge international movement of performers and artists who travel the world to create these types of shows. 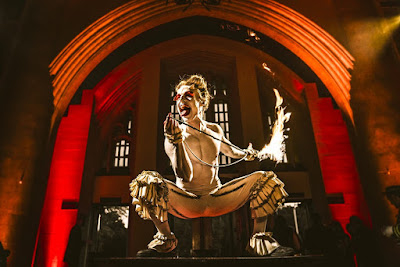 Pearl-clutching Masons who feel our buildings are no place for such public spectacles need not read further, and this will surely have generations of venerable Masonic figures from our past spinning in their graves at high speed. Some might even regard it as ghastly. But brethren who know our most significant buildings are always in need of income and public exposure to our communities need to read up on this innovative use of the world's largest Masonic building. 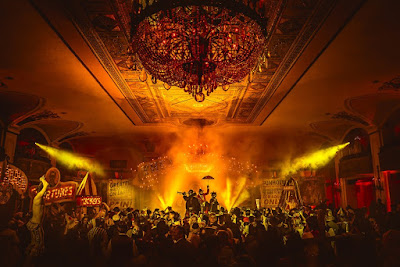 The good news for Detroit's Freemasons is that, apart from much needed income, it draws quite literally thousands of people into their building who would otherwise never have encountered it. While the performers and acts themselves would have shocked our predecessors and rung up the vice squad, the actual attendees at its two Gala Nights are strictly required to dress in formal masquerade attire. The general public is invited to attend throughout the week. And the Detroit Temple's uniquely varied architecture and design is the perfect backdrop. The designers and organizers take full advantage of the public's vague sense of secretive, occult spookiness with which Freemasonry has been suffused in the popular culture for decades. 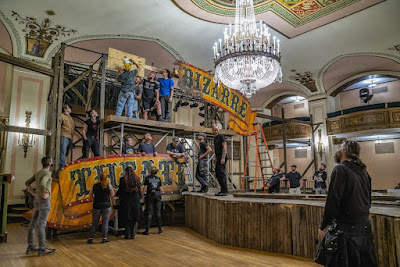 It takes weeks (starting each September) to install all of the scenery, props, lighting, effects, and more. Resident lodges change their rooms and meeting schedules to accommodate the show.
I fully realize that many Masons may absolutely recoil in horror at the sort of onstage acts this particular program hosts and want no part of seeing it in a Masonic building. 'Community standards' are an ever-shifting landscape, while Masonic ones tend to be less changeable.  Many years ago, one of our local Grand Masters became quite agitated against the notion of renting out our large and abandoned auditorium to theatre groups because he was terrified of potentially seeing an ad for "Come and see The Vagina Monologues at the Masonic!" Fifty years ago a different Indiana Grand Master made a very public condemnation of our magnificent Murat Shrine theatre and forbade them from booking the musical Hair because of its language, disrespect of the flag, and its notorious nude scene. He threatened to expel any Masons who rented their buildings out to "obscene" productions. The story hit the national news. He was lauded by the entire community and the police department for weeks, on the news and in print, for protecting the city from licentiousness.

That was 1969, the summer after the so-called Summer of Love. Today, grade schools wouldn't hesitate to take kids on a field trip to see that same show. 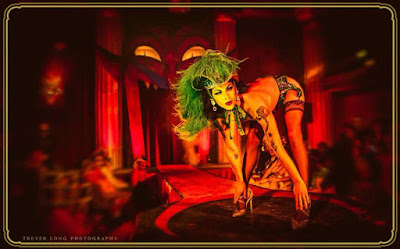 I won't condemn or defend anyone who would agree today that a program like Theatre Bizarre is just beyond the pale of what many Masons regard as our sacred spaces. There's no hiding that this year's Detroit event will present (among others) a burlesque show called the Dirty Devil's Peep Show, dominatrixes at the Fistitorium, and punk-rock bands like Messer Chups, Mother Feather, and Death. I'll just say that our lodge rooms only become sacred spaces when we meet as Masons, and that extends to caves and quarries, taverns and cabins, and anywhere else. 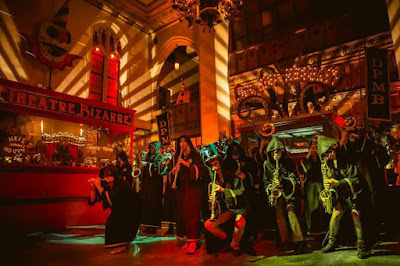 Our most significant buildings were almost always meant by our predecessors to be open to and welcoming of the local community, to be part of the fabric of our towns. For way too long, so many of our most important temples have been slipping away from us specifically because we have failed in that mission. Detroit's brethren need to be applauded for recognizing this and shining a spotlight on their Temple in a way that the community appreciates and enjoys.

If you've never visited the Detroit Masonic Temple for yourself and had the COMPLETE tour, put it at the very top of your Masonic list of things to do. It is the largest Masonic building in the world, and was designed to accommodate 50 different Masonic organizations. Including its on-site hotel rooms on the former Shrine end of the building, it contains over a thousand different rooms, and no detail was left out.
Written by Christopher Hodapp at 10/19/2019