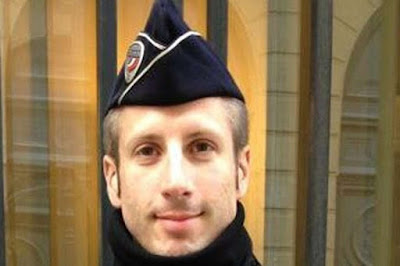 A Brother in France forwarded me a message over the weekend concerning a lodge meeting in Versailles on the outskirts of Paris on the night of April 20th. Loge Lumiere Eccossais (Scottish Light) was holding its regular meeting, and unbeknownst to the members on this particular evening, the terror attack on the Champs-Élysées that killed police officer Xavier Jugelé was taking place.

The Tyler and Past Master of the lodge recounted the evening:


"During the course [of the meeting], the Venerable Master had read the nomination of a lay person who expressed the wish to become a Mason. A young man of 37 years. Looks like an excellent candidate! Not very unusual... Two minutes after the end of the meeting, we learn the terrible news of the shooting on the Champs, especially that of the death of one of the officers on duty at that time and place. Less than two hours after the end of the meeting, we learn that the policeman murdered is...the candidate talked about tonight.

Officer Jugelé was deliberately shot in the head last Thursday while sitting in his police van. He had been stationed there to help protect citizens and tourists on the densely packed avenue that my wife and I have spent countless hours on ourselves. With no warning, he became a victim himself. Two other police officers and a bystander were also wounded in the attack before the gunman, Karim Cheurfi, was shot and killed by police.


Cheurfi had previously been convicted of three attempted murders – two against police officers – after an incident in 2001. Sentenced to 20 years, he won a 2005 appeal and was released from prison early in 2013. A note expressing his support for Isis was found near his body Thursday night.

Jugelé's death brings the number of victims of Islamic terrorist attacks in France since the Charlie Hebdo incident in January 2015 to 239. Jugelé has been posthumously promoted and awarded the Legion of Honor. His public funeral service was held yesterday. 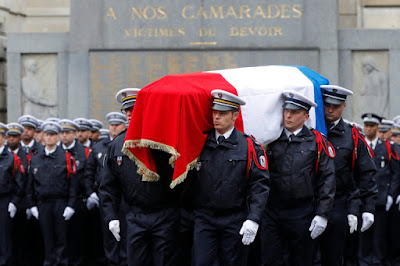 I did not originally post this story when I first read it, because European Freemasons frequently encounter trouble in some quarters when publicly associated with the fraternity. However, it was given wide circulation on the L'Express magazine's Masonic-related blogsite La Lumiere, written by reporter François Koch, so nothing I could post here would reveal anything more to the public now.

There is a term some of us use to describe certain men who were never themselves Freemasons, but were certainly deserving of being called 'Brother' nonetheless: "Masons without aprons." Xavier Jugelé is one of these men.

Loge Lumiere Eccossais is affiliated with the Grande Loge de l’Alliance Maçonnique Française (GLAMF), a 15,000 member jurisdiction that broke away from the GLNF a few years ago during a major internal dispute over the Grand Master at the time.

Not that it matters one infinitesimal damn to the poignancy of this story.