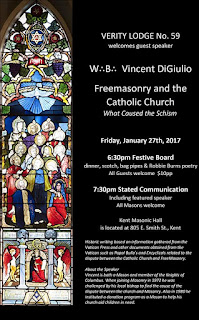 For some odd reason, the last week or so has had more than the usual share of stories come up regarding Freemasonry and Catholicism. As a result, over on Facebook, Brother John Hurst called my attention to a related presentation going on out on the West coast at the end of this month.

On Friday, January 27th, 2017, Verity Lodge 59 in Kent, Washington will host a presentation by WB Vincent DiGiulio: Freemasonry and the Catholic Church - What Caused the Schism?

Vincent is a Mason and a Catholic, and when he became a member in 1972, he was challenged by his local bishop to find the source of the longstanding dispute between the Church and the fraternity. He was subsequently permitted access to the Vatican Library to research the subject, and self-published his collected historical findings in a book available on Amazon's CreateSpace. (It is a sad side effect of Amazon's print on demand service that such books of any length are expensive, not through greed of the author, but usually just because of the printing process.) In addition to his Masonic membership, he is also a member of the Knights of Columbus. So, papal bulls, canon law, and opinions notwithstanding, he has obviously come to grips with the controversy enough to remain active in the Church and Masonry, and still sleep well at night.

The event at Verity Lodge will begin with a Festive Board at 6:30PM ($10 per person), followed by the Stated Communication at 7:30PM, during which WB DiGiulio's presentation will be made. Visiting Master Masons are welcome to attend. The lodge is located at 805 Smith Street, Kent, Washington. For more details, click the graphic above to enlarge it, or visit the lodge website HERE.

For the most recent scholarship on the Church's official position and current canon law prohibiting Masonic membership by Catholics, please have a look at Deacon John J. McManus' 2009 presentation at Gate City Lodge 2 in Atlanta, Georgia. CLICK HERE.
Posted by Christopher Hodapp at Tuesday, January 17, 2017