Fire at GL of Philippines 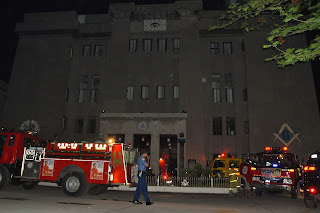 According to Subic Bay News, a fire struck the ground floor of the Grand Lodge of the Philippines building at San Marcelino St., Malate, Manila, particularly the York Rite office.  Over 50 OSM (Order of the Secret Monitor) officers & members, led by Supremo (MW) Avelino Razon, had to orderly move out of the building through smoke-filled halls and stairways.  MW Santiago T. Gabionza, Grand Master of Masons in the Philippines, was on hand along with several other officers, to oversee the successful fire-fighting efforts.

According to the article:


The Order of the Secret Monitor (OSM) was wrapping-up its conferral and meeting at the 4th floor of the building when the lights went out, followed by fire truck sirens and shortly after, noticed that there wass a fire alarm at the ground floor.