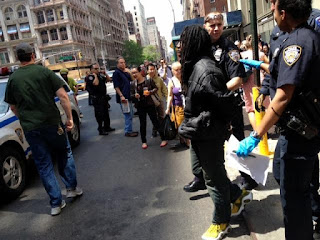 A man is in police custody today after vandalizing the Grand Lodge of New York's building at 71 West 23rd Street in Manhattan. He came into the building muttering about wanting to see the Masons and the Illuminati, and then began running through the building, damaging display cases and breaking glass. Police were called by security personnel , and they responded very quickly, arresting him (the fellow with the dreadlocks in the above photo).
Written by Christopher Hodapp at 5/10/2013