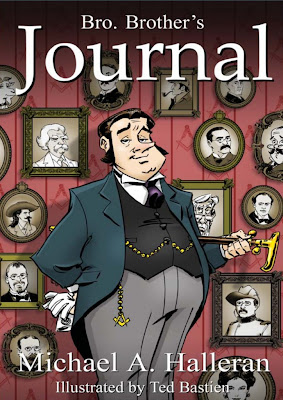 Allegedly discovered at a country auction, Bro. Brother’s Journal contains the personal reminiscences, the earliest dating from 1893, of Hiram H. Brother (1872 – 1970), a prominent Freemason from Kansas City. Published serially in the Scottish Rite Journal from 2007-2010 and 'edited' by Brother Michael Halleran, the complete collection (to date) will be available in January 2012 in paperback including all stories previously published plus several new adventures, with original illustrations by Ted Bastien (of "Bugsport" fame).

Keep checking the Brother Brother's Journal website for updates. It will be published by Macoy Publishing.

This mulligatawny soupçon of tales from Bro. B’s diary will provide many an evening of happy diversion. For those disposed to the observation of the passing parade, they will fondly encounter famous brethren, as well as an affable assemblage of seditious secretaries, timid tilers, pesky prompters, grim Grand Masters, rakes, rotters, bounders and ear benders, who are, dare I say it, not dissimilar from the lovable fellows who inhabit our own lodges today.

Michael Halleran is also the author of The Better Nature of Our Angels, an outstanding book about Freemasonry during the American Civil War.