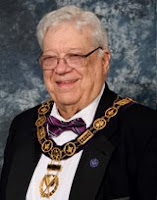 The Grand Lodge of Indiana has officially announced the retirement of longtime Grand Secretary Max L. Carpenter, PGM, effective January 1, 2010. Max has served as Grand Secretary in Indiana for 17 years, and was president of the Conference of Grand Secretaries in 2008-09.

In honor of Max's many years of service, there will be an informal reception for brethren, guests, and the general public immediately following Founders Day, Saturday, January 16th, 2010, in the Grand Ballroom at the Scottish Rite Cathedral in Indianapolis.