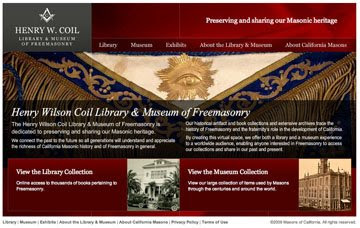 WBro. Adam Kendall sends the message that the new website for the Henry W. Coil Library & Museum, housed at the Grand Lodge of F. & A.M. of California, has been launched at www.masonicheritage.org. It contains links to view the museum and library collection, which will grow as more objects are added to the database. Also included is the present exhibit, as well as other information. A video that accompanies the "Builders of the Dream" exhibit will also be posted in the next week or so.

Adam is the Collections Manager of the library and museum.

I had the honor to visit and speak at the Library and Museum in San Francisco two years ago, in conjunction with the Museum's hosting of the traveling Initiated Eye exhibit. California Masons have a facility of which they can be proud, that is helmed by a talented and enthusiastic Brother. If you can't visit in person, stop by the website.
at 5/11/2009