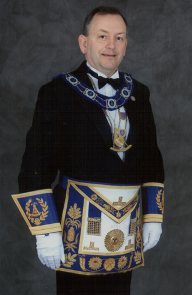 Right Worshipful Brother Grady Adams, Grand Master of American-Canadian Grand Lodge of Germany, has passed away. Adams had just arrived in Bahrain, and as he was descending the plane's ramp, he was struck with an apparent heart attack. Efforts to revive him were unsuccessful.

Please keep his wife Efli in your thoughts and prayers.

The ACGL is actually a grand lodge that operates as part of the United Grand Lodges of Germany (VGLvD). Freemasonry throughout Germany's history has been riddled with schisms, rivalry and unusual development, both before world War II and after. Several rival grand lodges arose in the country after the war, and foreign grand lodges chartered lodges and Masonic clubs for the Allied troops and contractors who were there in large numbers to rebuild the country. In 1946, a British-chartered "Square and Compass Club" in Frankfort petitioned the Grand Lodge of Oregon to start a military lodge, and Oregon Military Lodge U.D. was established with 56 members. Grand Lodges of Connecticut, Rhode Island, Texas and others soon established their own lodges across Germany for their English-speaking brethren. The American-Canadian Provinical Grand Lodge was organized in 1962 as part of the United Grand Lodges of Germany, and today comprises 44 lodges in Germany, as well as the Middle East, where they operate while keeping a very low profile.
Written by Christopher Hodapp at 3/20/2009