Kodiak and the Grand Lodge of Alaska 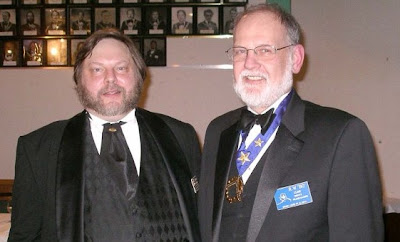 Me and the new Grand Master for Alaska, MWBro. John R. "Bo" Cline.

My all-too-brief visit to Kodiak, Alaska and the annual communication of the Grand Lodge of Alaska was truly a once in a lifetime experience, and I owe a tremendous wealth of gratitude to Most Worshipful Brother Jared Decker, now the immediate Past Grand Master, and his lovely bride Suni, for their friendship and their hospitality. All of the brethren were great fun and made me feel at home. Kodiak is a remarkable place to visit.

Despite fears of the explosion of the Mount Redoubt volcano that never happened, and eight inches of snow that DID happen, the airport was opened in time Thursday morning for almost all of the attendees to at last make it in. GM Decker had counted on the local hotel's promise of the construction of a new convention center in time for this event, but when it became obvious that wasn't going to happen, the Kodiak American Legion Hall and the Elk's Lodge both came through with facilities to accommodate the grand lodge activities. In keeping with their promise to overfeed me, the opening night dinner at the Legion featured cod fresh off the boat and the biggest King Crab legs I've ever encountered. 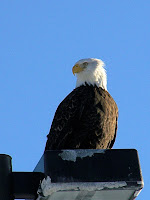 BTW, anyone who thinks the American Bald Eagle is endangered hasn't been to Kodiak. Entire flocks of them fill the trees, line the roofs and stand on every light pole around town.

The Grand Lodge of Alaska is in the largest state of the union, yet is one of the smallest with just 19 lodges. Alaskan lodges were under the jurisdiction of the Grand Lodge of Washington until the Alaskan's voted to form their own in 1981. Nevertheless, close to a hundred brethren attended this year's event, with visitors from across the US and Canada. This despite historically discouraging weather almost every February ("Last year in Fairbanks it was 65 below zero! Ya shoulda been here!").

Again, my deepest thanks to everyone who made my trip to Kodiak a memorable one. And congratulations to Most Worshipful Brother Bo Cline, the newest Grand Master of the Grand Lodge of Alaska.

No rest for the stooopid. Alice and I are off to Washington DC in the morning for Masonic week and the first meeting of The Masonic Society.
Written by Christopher Hodapp at 2/08/2009