Changes at the Knight Templar Magazine 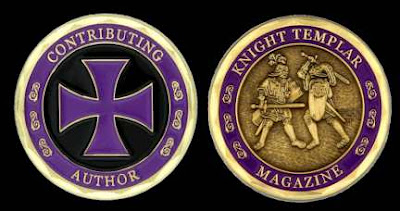 After nearly three weeks of non-stop traveling, I'm sifting through the mail today and came across a nice surprise. In an upcoming issue of the Knight Templar Magazine, I made the small contributions of a old photograph, and a review of Stephen Dafoe's Templar comic, Outremer. My unexpected reward from the magazine was this beautiful coin.

This is just one of the numerous changes that have been made to the KT magazine by editor John Palmer. Just since the end of last year, the KT Magazine has undergone a major renovation. It has expanded from 32 to 36 pages, with new typefaces and full color. Advertising has been added to help pay for the increased costs, giving 130,000 Templars exposure to products and suppliers. They have assembled an outstanding editorial board: Rex Hutchens, Stephen Dafoe, Aaron Shoemaker, Leroy Delionbach, Terry Plemons, and Sid Dorris. And they have pledged an end to the longstanding lineup of grip n' grin photos, 50 knights snapped from across the street in such fuzzy detail that their faces look like thumbs, or photos of sticking lapel pins on each other. They have promised more feature articles on the history, symbolism, and philosophy of Templary, Christianity, and Freemasonry, and delivered on those promises. With all due respect to the brethren who used to write them, gone are the articles about dead baseball players who were Templars. Today, you are more likely to read about the Church of the Holy Sepulcher.

Bravo to all involved at the KT Magazine. Your work has not gone unnoticed.
Written by Christopher Hodapp at 2/16/2009