by Christopher Hodapp
The Staten Island Live website posted a pictorial survey this weekend of several current and former Masonic temples that still stand today, a century or so after most of them were first built.
See Masonic Temples Across Staten Island by Jan Somma-Hammel
If you don't live in New York, Staten Island one of the five boroughs of New York City and sits on the southwestern edge of the metropolis. (Most Americans have at least heard of the Staten Island Ferry that gives great views of the Statue of Liberty. You take the ferry because the subway can't get to the island.) In fact, Staten Island is the southernmost tip of New York State - chuck George Washington across the bay and you'll whack New Jersey on the other side.
Back in the day when people didn't drive everywhere, big cities were especially planted thick with local establishments that were within walking distance or a streetcar ride away. That period between the end of the Civil War and the Great Depression was marked with an incredible boom of building, especially for fraternal groups that were all competing with each other for members. When strong neighborhoods developed in larger cities, it was common that men walked to their local factory or office jobs, the kids took their wagons to the corner store to pick up mom's usual order, and no air conditioning meant folks sat on their front porches to cool off and chat with passing neighbors.
This was the important half century during which the most incredible Masonic temples were constructed. Whether they were huge halls that were home to several lodges and appendant groups, or small single-lodge temples, the Masons wanted the very best for their clubhouses. And the temples on Staten Island are a good example. Lodges made use of the skills and professions of their membership - one of the architects of Huguenot Lodge was a designer for the local terra cotta factory, and the building features terra cotta details inside and out.
Not all of Staten Island's Masonic temples have remained in the hands of the fraternity. In 1993, the 1926 lodge hall of Great Kills Lodge 912 was sold to a congregation of Coptic Christians, who enlarged it and added a new sanctuary in 2007. 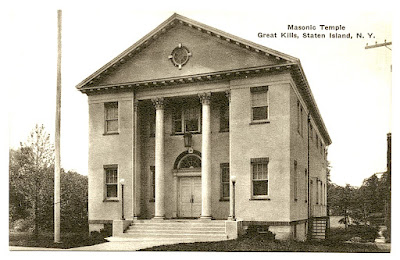 Staten Island today is still home to six Masonic lodges, within the Grand Lodge of New York's Richmond District. They cooperate on charitable programs for the local community.
Posted by Christopher Hodapp at Sunday, November 14, 2021