Calling All Wishful Masters - All Aboard For the Clandyland Express! 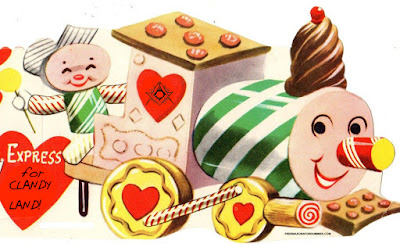 by Christopher Hodapp
Well, golly! The Clandyland Express has chugged into Indianapolis! There's apparently a brand, spankin' new "Masonic lodge" right here in my own hometown!
So-called.
The so-called "Sovereign Grand Lodge of Universal Supreme Council Of The 33rd And Last Degree, Incorporated,"  so called, has just issued a so-called "charter" establishing the so-called "T. L'Overture Lodge No. 5." 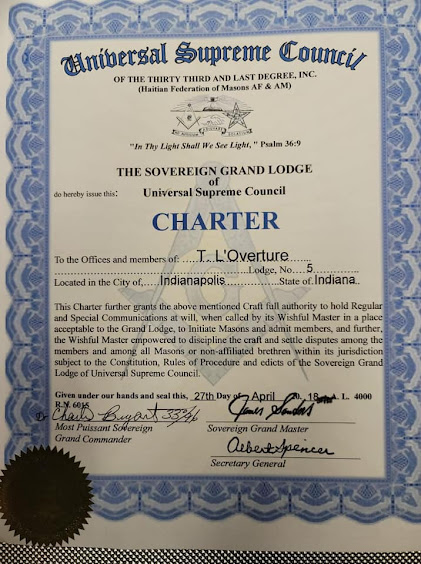 That 'incorporated' sure makes it official! (I guess that makes sense to name an Indiana lodge after Toussaint L'Overture, the leader of the Haitian Revolution in the late 1700s, since this document is claiming that the SGLofUSC33aLD, Inc. is a part of the so-called "Haitian Federation of Masons AF & AM").
Click the image to enlarge it and get the full effect of this so-called "charter." It empowers the "lodge" to hold "Regular and Special Communications at will, when called by the Wishful Master..."
Hey, spellcheck typos happen to the best of us, right?
Except that it goes on, "[T]he Wishful Master empowered to discipline the craft and settle disputes among the members and all Masons or non-affiliated brethren within its jurisdiction..."
It's signed with three very florid signatures, including the Most Puissant Sovereign Grand Commander (!) who included his rank "33°/96" which implies there are really 96 degrees in their system, which is curious when they call themselves "Sovereign Grand Lodge of Universal Supreme Council Of The 33rd And Last Degree."
Oh, details, details.
One wonders if their officers process into lodge while singing 'When You Wish Upon A Star?'
If you're a legitimately regular Master Mason in the U.S. in a recognized jurisdiction, your ritual likely exhorted you to have no 'Masonic intercourse' with clandestine Masons. Clandestine groups like this are exactly what your ritual was talking about.
People who join 'Masonic' lodges under the jurisdictions that are considered irregular, clandestine, bogus and unrecognized by the principal grand lodge in a state (or country) will not be allowed to visit and interact with the overwhelming majority of the Masonic world, outside of their own isolated group. That's just truth in advertising, and people should understand what they are joining, and what they are not. Unfortunately, people tend to join organizations that their friends, family or co-workers do, and bogus groups are somewhat self-perpetuating. They are often fueled by new public awareness of Freemasonry from media sources.
Masonic regularity and recognition are issues that make outsiders' eyes glaze over, but I think ALL regular and overwhelmingly recognized grand lodges need to address the issue on their public material. It would help to put a stop to - or at least slow down - the practice, and guide potential new members to the more widely welcoming world of Masonry.
There are hundreds of small 'grand lodges' or independent lodges at work, and many of them are listed by the Prince Hall research group, the Phylaxis Society. The Phylaxis Society's Commission on Bogus Masonic Practices listing was at one time quite exhaustive, but the new ones multiply faster than bunnies in a hutch. New ones pop up every day, and the Phylaxis site is woefully out of date at this point. While these phony groups can be found all over, they can be especially prolific in black communities. As is stated on the Phylaxis site, "There are more African American Bogus Grand Lodges in the United States than there are Legitimate Grand Lodges around the World." Sadly, opportunists see a chance to cash in on an ancient fraternity's history and reputation, and thus the problem continues.
Posted by Christopher Hodapp at Thursday, April 29, 2021