On Wednesday, the Grand Lodge of California issued its own official notice suspending all Masonic activity in the state, joining almost forty others so far. As the nation shuts down for the coronavirus pandemic, it's already becoming unusual for grand masters NOT to respond at this point.

Unlike most other jurisdictions, California's notice (above) places no time frame on the suspension of meetings, events and other gatherings - it is open-ended, until further notice.

While I've not been updating the list of grand lodge COVID postponements and closures around the country and the world, another diligent Brother has. See the latest list at the ForthRight website at Freemasonry & COVID-19 Updates HERE. 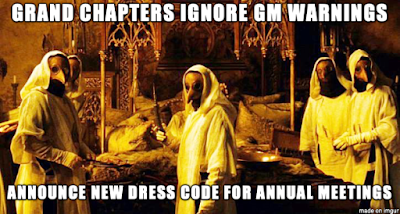 As all of this continues to unfold, there have been pockets of resistance from some stubborn appendant body leaders around the country who insist that state grand masters have no control over their members (who are Masons). While most Scottish Rite Valleys have shut down pretty uniformly, some Order of the Eastern Star and York Rite statewide bodies have stubbornly refused to cancel upcoming meetings in March and April, insisting that only they have authority over their own members.

Hopefully, such showdowns will be brief and without carnage as cooler heads and state and local health and government authorities all make such posturing moot. Hotels are shutting down, as mayors and governors are enforcing mandatory closures of facilities and banning ever smaller gatherings of people. A bunch of Masons caterwauling that their annual election of officers is more important than all of that is ringing as pathetically juvenile.

Hopefully, grand masters hold their reactions back, simply sit back and let local and state health officials and authorities do the dirty work of ordering all facilities to shut down. Better that than hurling suspension and expulsion thunderbolts when people are reacting more out of frustration and fear than stubbon defiance.

We had a Brother online in my state on Saturday hollaring that he was going to demit from the fraternity over these crazy orders from the GM, only to calm down by Monday and decide, 'Everybody's right, and I apologize. I've never felt this helpless.' It's a common reaction now to something none of us can see or even fight against. Disease is a bizarre enemy that breaks all the rules of normal conflicts. And this might be the first war the world has ever fought by being told to just sit on the couch. 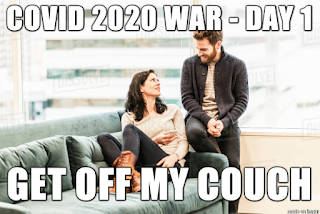