New to the Knights Templar? There's A Book Just For You

After watching the premiere episode of Knightfall that was entertaining and very well done, I want to pass along my own personal kudos to the writers for very pointedly inserting the line of a Templar Knight bitching about having stated meetings.

Brilliant. The show gets two thumbs up at Hodapphäus just for that alone!

In case you're new to the subject of the Knights Templar and hunting an introductory reference book as Knightfall starts airing this week on History™, permit me to blatantly recommend the following volume co-authored by myself and Alice Von Kannon: The Templar Code For Dummies (Wiley: 2007) $19.95 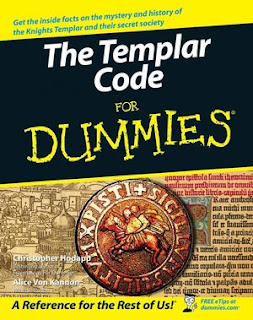 You'll find the full story of the rise and fall of the Poor Fellow Soldiers of Christ and the Temple of Solomon, from their humble start on the road to Jerusalem guarding pilgrims, to their meteoric climb as the most powerful military and political force in the Holy Land and Europe, their role as the first international bankers, and their subsequent plummet from grace and influence to total destruction—all in just the two hundred short years of the 12th and 13th centuries.

On the way, you'll discover the origins of the Holy Grail myth and the proliferation of sacred relics throughout the Middle Ages; the rise and suppression of Gnosticism and other "heresies"; the Mary Magdalene "black Madonna" cults; Baphomet and the accusations of witchcraft, idolatry, sodomy, and heresy against the Templars; the very real plots of King Philip IV ("the Fair") and his hatchet man, Guillaume de Nogaret that unfolded against Pope Boniface VIII, successor Clement V, the Jews and the Lombards in France, and finally, the Knights Templar themselves; famous real and alleged Templar historical sites like London's Templar Church, Rennes-le-Château, what remains of Paris' Temple and execution sites, and Scotland's Rosslyn Chapel; and much, much more. Plus, you'll find the modern day connections to the Templars, along with organizations that claim descent from them. Even the Templar theory of the creation of Freemasonry and why the two groups are associated with each other now.

The Templar Code For Dummies