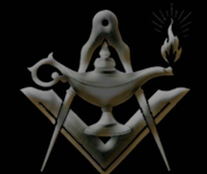 It was great to receive a copy of the newly formatted Fraternal Review, the monthly publication of the Southern California Research Lodge. The new magazine is a beautifully designed publication, now edited by Brothers C. Douglas Russell and Dago Rodriguez, and art directed by Johnny Arias.

Back when I first joined the SCRL 15 years ago, the monthly mailing was a stack of Xeroxed pages, jammed with Masonic news, articles, and papers collected from all over the country. What it lacked in style, it more than made up for in content. It was a labor of love, packed up each month by volunteers, and fondly put together by the indefatigable Brothers Ralph Herbold and Norm Leeper. Sadly, Ralph passed away in 2009.

Ralph became a good friend over the years, and was an early admirer of Freemasons For Dummies, reviewing it shortly after it was first published in 2005.  He became a true champion of the book, and would always call me or drop me a letter or email to excitedly tell me every time the SCRL sold another thousand copies. Shortly afterwards, the Grand Lodge of California put it on their recommended reading list for new Masons, and it remains one of just three books listed in their Entered Apprentice Candidate Guide. The quick reception of the book by those brethren was extraordinarily humbling and gratifying, and I have never forgotten their kind support. 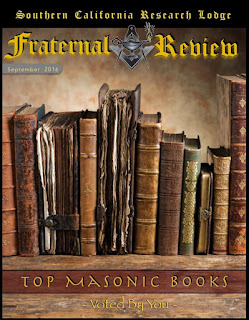 So, it was equally gratifying to discover that the September  2016 issue of Fraternal Review features a list of the "Top Masonic Books," as voted by the actual membership of the SCRL, and that the #2 book on the list of 25 is, in fact, Freemasons For Dummies.


While it is tantalizing to be so close to the top of the list, I certainly can't argue with Born In Blood being #1. Sure, Robinson's theory of the Templars morphing into the Freemasons has been mostly disparaged and debunked by scholars. Bob Cooper's The Rosslyn Hoax pretty much dismantles the whole Templar origin theory from top to bottom. And when he was asked why his books didn't contain footnotes, references, or bibliographies, Robinson replied, "I'm not a historian, I'm just an old Kentucky storyteller."

But despite all of that, his was the first book of any length I read about the fraternity before I joined, and that experience has been repeated by tens of thousands of men ever since its original publication.  Robinson certainly spun a good yarn and made a lot of intriguing observations that have captivated an awful lot of brethren, myself included. The only two other books he wrote in his life are also on the SCRL list, which attests to his talents and insights. So, I can't really be too disappointed by being beaten out by it.

In truth, there's no disappointment anyway, because being included on such an august list at all is an honor, more especially because it was made by Masons themselves. So, many, many thanks to all those members who voted in the survey who continue to find my book worthwhile.

One of the biggest perks of membership in the Southern California Research Lodge is their program that provides deep, deep discounts on Masonic books. For information on how to join the SCRL, visit their website HERE.