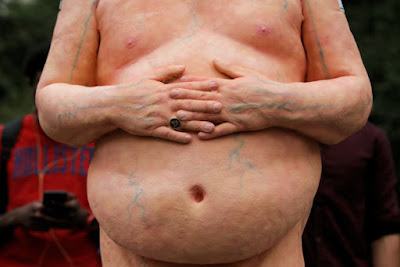 PLEASE TAKE NOTE: I am taking no public sides in the current political debate regarding the run for the presidency. I am simply reporting this peculiar development.

The latest exhibits of intelligent political commentary and discourse this election cycle have mysteriously appeared in several major cities across the U.S. today in the form of portly, nude caricature statues of Donald Trump. I will bypass the low-hanging fruit of commenting on the common criticisms among more purportedly "progressive" members of society against those who engage in "body shaming."  But one does wonder what the public reaction would be to a similar erection of Mrs. Clinton.

I will simply leave it to your own discretion to search for more revealing images of them online.

But I am posting this carefully cropped image of one of these alleged artistic representations to point out that the reputed Las Vegas-based sculptor included a Masonic ring on the right hand of Mr. Trump. I suspect it is supposed to make a visual accusation of the common "New World Order" cliché that traditionally pops up around political candidates every four years. (If you really feel the inclination, click the image above to enlarge.)

The statues were installed by an "activist collective" that goes by the name INDECLINE.

In any case, just for the record, Mr. Trump is not known to actually be a member of the Masonic fraternity.

(By the way, don't bother attempting to post a link to this story on Facebook. Mr. Zuckerberg's robotic censors have had a sudden, unexpected attack of good taste and are blocking it.)

Brother Greg Stewart over at the Freemason Information blogsite actually got in touch with the artist, "Ginger" (aka Joshua Monroe) who sculpted the statues to personally find out why the Masonic ring was included on Trump's finger.