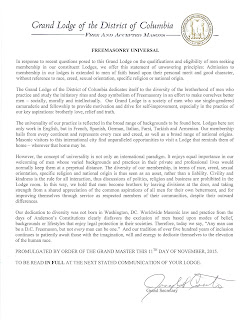 For Grand Lodges that have considered or already passed anti-gay legislation in their territories, or for those who may think that Masonry is for white Christians only, you might give a look to this letter that was issued on November 11th. The Grand Master of the Grand Lodge of the District of Columbia, MWB Jeffrey D. Russell, has issued the following statement concerning eligibility of men seeking membership in Masonry in Washington, DC. (Click the image above to see it larger).

In part, it reads:

In response to recent questions posed to this Grand Lodge on the qualifications and eligibility of men seeking membership in our constituent Lodges, we offer this statement of unwavering principles: Admission to membership in our Lodges is extended to men of faith based upon their personal merit and good character, without reference to race, creed, sexual orientation, specific religion or national origin.

The universality of our practice is reflected in the broad range of backgrounds to be found here. Lodges here not only work in English, but in French, Spanish, German, Italian, Farsi, Turkish and Armenian. Our membership hails from every continent and represents every race and creed, as well as a broad range of national origins. Masonic visitors to this international city find unparalleled opportunities to visit a Lodge that reminds them of home - wherever that home may be.

However, the concept of universality is not only an international paradigm. It enjoys equal importance in our welcoming of men whose varied backgrounds and practices in their private and professional lives would normally keep them at a perpetual distance. The diversity of our membership, in terms of race, creed, sexual orientation, specific religion and national origin is thus seen as an asset, rather than a liability. Civility and kindness is the rule for all interaction, thus the discussion of politics, religion and business are prohibited in the Lodge room. In this way, we hold that men become brothers by leaving divisions at the door, and taking strength from a shared appreciation of the common aspirations of all men for their betterment, and for improving themselves through service as respected members of their communities, despite their outward differences.

Our dedication to diversity was not born in Washington, DC. Worldwide Masonic law and practice from the days of Anderson's Constitutions clearly disfavors the exclusion of men based upon modes of belief, backgrounds or lifestyles that enjoy legal protection in their societies. Therefore, today we say, "Any man can become a D.C. Freemason, but not every man can be one." And our tradition of over five hundred years of inclusion continues to patiently await those with imagination, will and energy to dedicate themselves to the elevation of the human race.


Many thanks to Brother Eric Diamond for passing this along.
Posted by Christopher Hodapp at Thursday, November 12, 2015