Stone and Time Capsule Moved By GL of Michigan 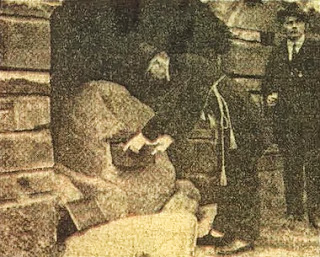 The cornerstone and time capsule to a long lost Masonic site has been found in Michigan and moved to the Grand Lodge.

From MLive by Andrew Krietz:

It's a moment almost 90 years in the making that was nearly lost in time itself.
A 3,000-pound Masonic stone that hid from its members for years traveled across town Tuesday morning before coming to a final resting place at the Grand Rapids Masonic Lodge.
The stone, much like the time capsule it once held, tells a story of the fraternity's grandest of celebrations in the Grand Rapids area nearly a century ago.
That is, before it was forgotten — twice.
"I want to learn of the men who put the stone there … I know what I went through to get it here, I can only imagine what they went through to put it there," said Michael Clark, a local Freemason.
"I am so happy that maybe I've done a little bit to continue what they started — that's Masonry; we always look back to those that came before us."
Clark joined the local Masonic fraternity in 1976 before moving to Florida and returning years later in 2008.
A self-described history buff, he's poured over minutes of the Grand Rapids Masonic Lodge No. 34 and discovered references to a "Cryptic Deposit" located on the site of the former Masonic County Club in Walker, which now is home to the Green Ridge Square shopping center.
Freemasons across Michigan gathered by the thousands in 1922 at the site of the country club, celebrating the opening of the new course for their members.
It featured 27 holes, tennis courts and a giant amphitheater to host sporting events and more. The Grand Rapids Herald at the time called it "an impressive ceremony" with a 40-instrument band providing entertainment.
The Freemasons were so proud of their achievements that they chiseled a hole inside one of the largest stones on the site and put in it a time capsule, not to be opened until June 19, 1999, 75 years after its dedication.
It contained a coin, some letters to future mayors of Grand Rapids and Michigan, in addition to a small trowel, which is a Masonic symbol, Clark said.
No one really remembered the course nor the time capsule until some 75 years later, in 1999, when Amy Van Steenbergen, living in Virginia, inquired.

"A lady called … saying, 'When I was a little girl, my grandfather attended the dedication and told my father to tell me he wanted me to attend. So when's the ceremony?'" Clark said. "We said, 'We had no idea what you're talking about.'"

From The Grand Rapids Press, in 1999:
"The morning of June 19, she, her brother, Michael Hill of Albuquerque, N.M., nephew John Frisk, of Salt Lake City, and her husband, Terry, parked their car along the road behind Green Ridge shopping center. They got out and walked up the hill toward the old ninth green. Terry carried a metal detector, scanning the ground, looking for the time capsule, but finding nothing but junk."
About a week after the story was published, a local neighbor contacted the Masonic Temple, Clark said. She knew where the crypt holding the large stone was and led members of the Michigan Masonic Library to its hiding place.
But the time capsule and the bronze door had been removed — likely decades earlier — its contents yet again lost, Clark said. Because the stone was really of no value to anyone with no real plans to have it moved, the stone's location again was lost.
Clark said it's been his personal journey since 2008 to find the deposit.
With a map of the original country club in hand that year, Clark said he explored an area near the original 9th hole of the course, yelled "Where are you!?" and found it just yards away from where Van Steenbergen and her family walked just a decade ago.
A team of three workers from River Ridge Landscaping helped to lift the stone from its spot to its new home Grand Rapids Masonic Temple for a little more than $1,000 in equipment and manpower.
Plans now are in development to create a new time capsule to be placed inside the stone to celebrate the Grand Rapids Masonic Temple building's 100th anniversary in 2015.
And when that day comes around, Van Steenbergen wants to be there.
"Moving the stone is a good idea because it's something historical that the Freemasons can keep an eye on," she said. "It just is something like a family mystery to me ... my dad told me to go there, and I'll look forward to finally getting the chance."