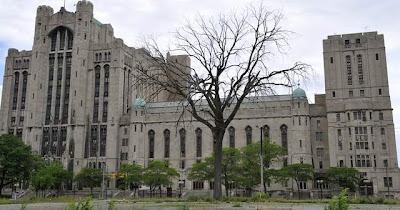 Some cautiously optimistic news out of Detroit about the largest Masonic temple building in the world, from The Detroit News:

A plan is in the works to pump $38 million into Detroit's Masonic Temple and the surrounding desolate area.

The investment in the world's largest Masonic Temple, in the Cass Corridor, is being driven by a team of state and city economic power brokers who are working on the financing and declare the deal could be done by year's end, according to information that was posted online by the Michigan Magnet Fund.

"At this stage, it is expected the project will be able to close in six to eight months," according to the memo, written about a month ago, by the Magnet Fund. It's not clear how long the memo was online, but it was removed Friday after The Detroit News made telephone calls to fund officials.

Plans call for a $9.3 million parking garage, as well as $5 million in inside upgrades that include a new geothermal heating system and more women's rest rooms.

The once-grand facility has a storied past in Detroit entertainment history, often used by traveling companies of Broadway shows, as well as top musical acts of the day.

The project also calls for $4 million in upgrades to outdoor public lighting and improvements to Cass Park across the street.