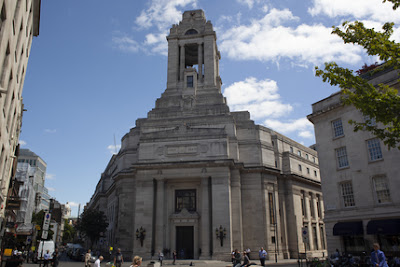 Most states have relaxed their COVID restrictions enough that many American grand lodges are again permitting in-person lodge meetings to one extent or another. The patchwork of state and local orders are too numerous to cite, but even restricted versions of degree work are taking place in some states, almost all requiring masks, distancing among sideliners, etc. I've seen a couple of announcements of outdoor degrees, which is another novel way to deal with the issue of social distancing.

England, however, has been another matter. English health laws have banned all gatherings up until now, forcing lodges to give up in-person meetings. However, this week the country is moving to a 'Rule of Six' about indoor assemblies.

Therefore United Grand Lodge of England's Grand Secretary, David Staples has just announced that all lodge and chapter in-person meetings are restricted to no more than six people. This is to comply with current health laws and restrictions in England at this time. He stresses that this only applies to Masonic lodges and chapters meeting within England itself. (Wales continues to outlaw all in-person gatherings, period.)

The so-called 'Rule Of Six' message in its entirety:

Following a meeting of the Craft Rulers and the Standing Committee of the Board of General Purposes, and in consultation with the Royal Arch Rulers and the President of the Committee of General Purposes, it has been decided to restrict English Lodge and Chapter meetings to no more than six attendees. This is in response to the new laws which come into force today, Monday 14 September.

Larger meetings in Covid-19 Secure venues are permitted by the new laws, and this decision was not taken lightly, but it was felt that it would send entirely the wrong message to our members, and to the public, if Lodge and Chapter meetings of over six people took place at this time. This position will be kept under review and further measures will be announced shortly. UGLE and SGC remain committed to following appropriate official guidance, and to be seen to do so, whilst allowing individuals, Lodges and Chapters to decide what is right for their own particular circumstances.

UGLE also now advises that face coverings are worn at all meetings, even though the law does not currently require this. For the avoidance of doubt those who are exempt under the law from wearing face coverings in shops are not expected to wear them at meetings.

The, admittedly small, good news is that if they wish, the six or fewer who attend a meeting may now dine together.

This message applies only to Provinces in England. In Wales, legislation still prevents any Masonic Meetings from taking place at this time.