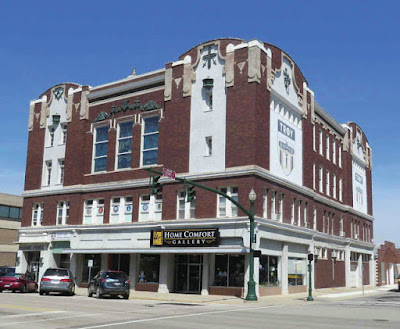 From a story by Aimee Hancock on the Troy Daily News website on February 24th:

The historic building was constructed in 1907 by the Troy Franklin Lodge. According to Purke, early indications are that the Masonic Temple building, which is listed on the National Registry of Historic Buildings, will be saved and repurposed, though specific plans for the building have not been announced at this time.

The building has been the meeting place for the Masonic lodge members for generations and features two [sic] signature, one-of-a-kind stained glass windows on the third floor, a marble staircase, and an interior that dates back to the early 1900s.

“Our roots are here in Troy,” he said. “A lot of the founding fathers of Troy were founding fathers of our lodge. The majority of our members are from Troy and we want to stay part of the community; like any other fraternal organization, we like to help the community and do anything we can with what we’ve got.”The second floor of the Masonic Temple has been the home of the Miami Valley Veterans Museum since 2010 when the Masons offered the Miami Valley Veterans Museum a location to house their museum.


So the lodge selling its temple also means that the local veterans' museum is being given the boot, as well.

When the Temple was built on Troy's Main Street, it was deliberately situated as close as possible to the center of the community. Even today it dominates the skyline of Troy as you enter the roundabout in the middle of town, just as it did in 1907. 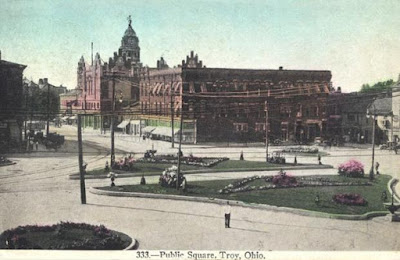 It sits just steps from the impressive county courthouse, and photos from its earlier years show that its facade has been slightly altered over time. 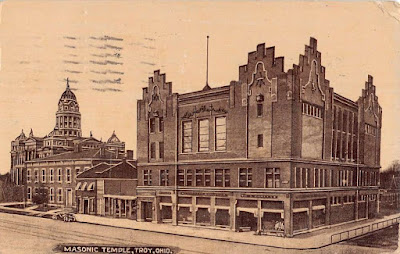 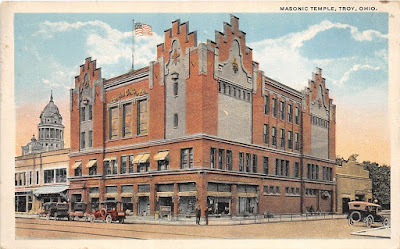 But time has not dimmed its irreplaceable stained glass windows that will never be equaled. They were installed at great expense and with loving care by their forefathers who hoped their grandsons would do even better and bigger things. 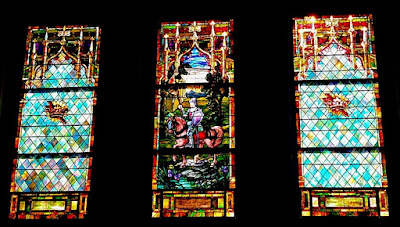 Franklin Lodge hasn't announced where it will meet from now on, but if hundreds of other lodges following this same path are any example, one can pretty confidently surmise it won't be in the heart of their town in a home befitting the oldest and greatest fraternal organization in the world, in a new temple inspired by the finest architectural and stonemason's arts.

And please spare me the "a lodge is not a building" excuses. A Masonic temple is a reflection of the Masons inside, nothing more or less. And it's about time we recognize that the most thoroughly abused and deliberately misunderstood phrase in all of Masonry is that "it is the interior, not the exterior of a man, that Masonry regards..." The Masons who built these places were the leading members of their communities. No mayor or businessman or architect or doctor or machine shop foreman in 2020 wants to discover that the greatest secret of Masonry is that their lodge wants to argue over who broke the flapper valve on the toilet they refuse to repair two months in a row. And unless we start acting again like we are worthy of attracting our community leaders to join and participate in Masonic lodges in the 21st century, this fraternity will continue to slip through our fingers until we are nothing but a nostalgic footnote to history. 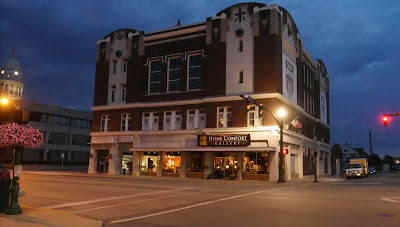