More: What's In A Building? 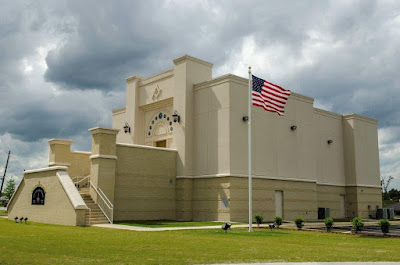 "A television series in which he will feature various lodge buildings around the US, as the lodge members decide to renovate the old buildings, and either keep them or sell them off."

Utter crap, but it's not a bad idea. With the advent of on-demand streaming video and the fracturing of the viewing public into tinier and tinier sub-atomic groups, I'm sure A&E would be thrilled to launch such a show with a guaranteed audience of seven guys forced to watch it in the lodge basement on their 16" Zenith because the Master left his Monitor at home in his other jacket so he couldn't read the Ancient Charges and he couldn't think of anything else for Masonic education that month. ("Where's the HDMI input? All I see are two screws and some wire rabbit ears back here.")

While I await that breathless call from New York producers, I don't want to disappoint anyone who clicked over here hunting that story. So I'll offer up the latest entry in my ongoing quest to encourage Masons to build better temple buildings. As long as we're going to have the damn things, then let's make them special.

I want to call attention to Rising Virtue Lodge 4 in Tuscaloosa, Alabama.

On April 11, 2011, two Masonic lodges - Rising Virtue 4, which is in the Forest Lake neighborhood, and its sister lodge, Von Bayer Lodge 699 in Alberta - were both destroyed by a terrible tornado that swept through the area. If someone really was going to "Flip This Temple," this was a helluva way to get the demolition done.


After the storm, the city of Tuscaloosa took the opportunity to strengthen its building codes and permitting requirements, along with demanding more landscaping because of the loss of so many trees and shrubs from the damage. Rising Virtue's original building was a sprawling 11,000 square foot hall that was all on one level, but they couldn't rebuild anywhere near that size and had to plan on a smaller two-story building to fit the lot and still have parking spaces.

Meanwhile, Von Bayer Lodge couldn't rebuild at all on their original lot because of the new city regulations and requirements. In the aftermath, the two lodges decided to merge and rebuild a single Masonic temple. The result is this beautiful 7,500 square foot facility that opened in August 2013. 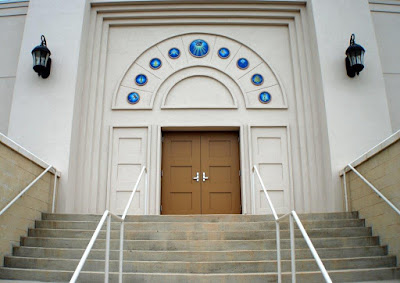 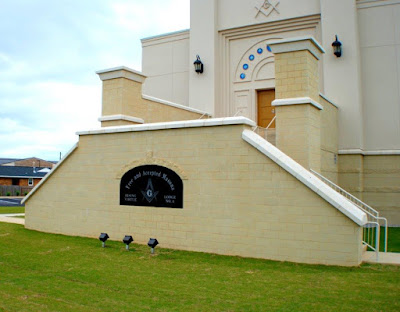 Most of all, it looks like a place that a man who has read or heard about the Freemasons imagines a Masonic temple should look like.

With all due respect, that's not something a pole barn in a bean field can claim.
Posted by Christopher Hodapp at Monday, April 01, 2019