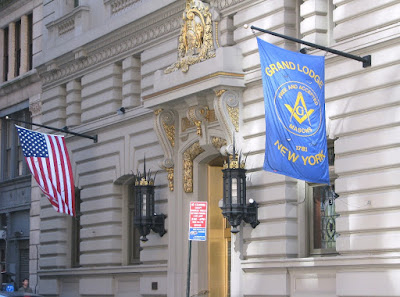 A quick comparison of maps of the New York City neighborhood of Chelsea where last night's explosion and subsequent second device were found shows that the Grand Lodge of New York's majestic Masonic Hall appears to be about a half block from the first explosion site.  Early news reports incorrectly showed the bomb that exploded was on the corner of 6th Avenue and West 23rd Street. The GL building is at 71 W. 23rd, directly across the street. One channel's site showed it directly in front of the building.

The actual site of the explosion was in front of the Center for the Blind's residential apartments at 135 W. 23rd. The explosion happened at around 8:30PM. 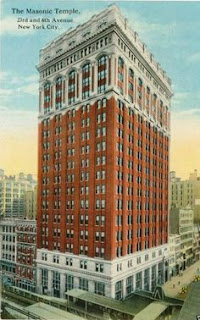 A second device was found several blocks away at 27th Street, between 6th and 7th. It was defused by the NYPD Bomb Squad. It appeared to be constructed from a pressure cooker.

Approximately 29 people were injured by the blast, one seriously, and there were extensive reports of shattered windows throughout the area, as well as in passing cars unlucky enough to be directly in front of the bomb.

However, messages this morning do not seem to indicate any Brethren were injured or killed, nor was there any damage to the Masonic Hall. For that, at least, we can be thankful. It was a crowded Saturday night in the popular NYC neighborhood, and directly in front of a blind center and St. Vincent de Paul Catholic Church (although, the 170 year old parish was closed several years ago, despite major efforts to save it by area residents). The effects of this blast could have been far, far worse.

The photo below gives you some idea of just how close this was to the GL of NY. In the center is the St. Vincent de Paul Church, and on the right side of the frame is the Masonic Hall. The blind center residence is to the left. 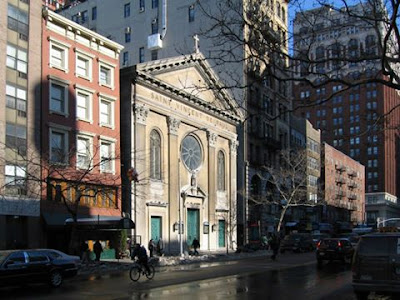 Unbelievably, shortly after the bomb detonation in New York, another explosion was reported last night in downtown Charlottesville, Virginia just off of the pedestrian mall. It occurred at 3rd and Water Streets, just two blocks from Widow's Son Lodge No. 60's temple. Fortunately, authorities there have preliminarily determined it to have been an underground transformer explosion, and not related to anything nefarious.

Things were already on edge Saturday. Earlier in the day, a pipe bomb exploded in a trash can in Seaside Park, New Jersey at the site of a Marine Corps charity run. Similar to the New York incident, two more unexploded devices were located by authorities and defused. Registration for the Seaside Semper Five race was slower than anticipated, which delayed the start of the race. As a result, no runners were passing by the bomb at the time it exploded, and there were fortunately no injuries. 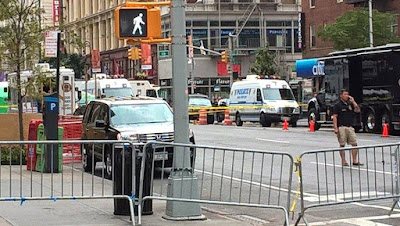 Brother Angel Millar passed along this photo from Sunday morning and reports that 23rd Street and 6th Avenue around the Grand Lodge are blocked to traffic, and police are still in the location. I also understand there are two parades scheduled in the city, and the President is traveling to the United Nations. So, chaos in the NYC area will be worse than the average Sunday. I suspect if you have a lodge or appendant body meeting on Monday at the GL building, you should call tomorrow just to make sure you can even get there or that the building is even open. 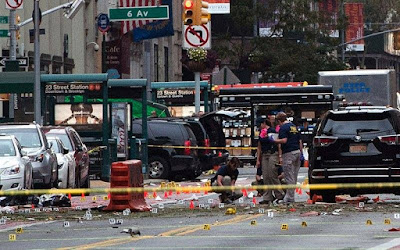 Brother Mark Koltko-Rivera passed this photo along with this message:

Another picture, this one from the website of The Daily Beast. The bomb went off between 500 and 600 feet west of Masonic Hall. In the photo, you see investigators at the actual intersection of 6th Ave. and 23rd Street, over 400 feet away from the blast. If you look on the upper margin towards the left, you see the bottom of the huge blue flag (with the words "New York" visible; the words "Grand Lodge" and the S&C are in gold, out of frame) that flies at the main entrance.

At of Sunday afternoon, there is absolutely NO indication that Masons or any lodge buildings were targeted in these incidents. I'm simply noting the close proximity of the explosions to lodge locations, as well as responding to messages of alarm from concerned Masons who are familiar with the areas involved. After the incident in Milwaukee earlier this year, security has been stepped up in many lodge buildings, especially larger ones. New York has certainly done so. But it pays to be aware.

It's worth mentioning that none of these incidents have been linked to radical Islamic or Jihadist activity as of this moment, and it is likely in the New York situation that the bomber was completely unaware of the location of the nearby Grand Lodge. I am certainly not making such a link. Had he been motivated by Islamic fundamentalism, he undoubtedly would have placed it right in front of the Masonic Hall.

As Brother Millar reminded me today, anti-Masonic language is common in many parts of the Islamic world, such as the Hamas Charter, Saudi Arabian Ministry of Education curriculum, Jihadist propaganda circulated by ISIS and al-Queda, and even mainstream Arab world publications. Yet, so many Western analysts who purport to be experts in terrorism are all too often totally ignorant of the anti-Masonic undercurrents in so much Islamist media. Masons are frequently linked with Zionism, principally because of our Old Testament symbolism. And our religious toleration is simply not to be tolerated. And so it continues.

Fortunately, in this weekend's incidents, we don't seem to have been in anyone's sights.
Written by Christopher Hodapp at 9/18/2016