Throughout both Britain and the U.S. today, more and more grand lodges are chartering or otherwise encouraging a growing number of lodges whose membership has an affinity with a nearby university. Some of these include Boston University Lodge and The Harvard Lodge in Massachusetts, The Patriot Lodge No. 1957 at George Mason University in Virginia, and The Colonial Lodge No. 1821 at George Washington University in Washington D.C.

Meanwhile, the United Grand Lodge of England has grown its own "Universities Scheme" that has encouraged scores of lodges in college and university towns to, in their words, "establish and/or enhance arrangements and opportunities for undergraduates and other university members to enjoy Freemasonry." These types of lodges appeal to younger candidates, and also provide another way for alumni and staff (many of whom were involved with traditional Greek-letter fraternities during their school years) to continue to connect sharing their university experience as a common interest. 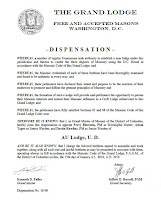 The newest such lodge in the U.S., American University Lodge U.D., was granted dispensation to work by Grand Master Kenneth D. Fuller of the Grand Lodge of the District of Columbia on January 25th, 2016, and on March 12th officers were installed, with WB Perry Blatstein as Master.  The new lodge is comprised of Masons who have an affiliation with or an affinity for American University in D.C. Members of the new lodge include students, alumni, faculty, staff, community supporters, and their relatives. There are currently 25 members, and the lodge already has two new Entered Apprentices. 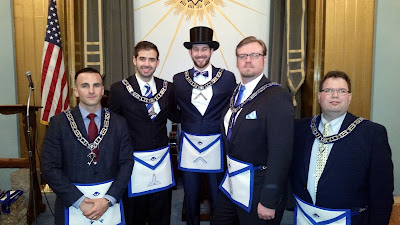 Following their officers' installation, MW Br. Leonard Proden, PGM, in his role as Sovereign Grand Inspector General in Washington, DC for the Scottish Rite (SJ), presented a very generous check to the lodge to support the Matthew C. Shlonsky Memorial Fund established at American University’s School of International service. The Worshipful Master and Senior Warden subsequently presented that check to AU's Dean of the School of International Service on April 15th.

Every member of American University Lodge U.D. pays $10 in addition to their annual dues, which will then be forwarded as a donation to the AU Library each year.

The DC Scottish Rite also created a new scholarship in honor of Charles and Eleanor Iversen. (MW Iverson is a Past Grand Master of DC and an Emeritus member of the Supreme Council of the Scottish Rite). The new scholarship program provides students with an interest in international service and demonstrated financial need the opportunity to study at American University.

The partnership between Freemasons and AU is over 100 years old, with multiple Masonic cornerstones having been laid on campus. Most recently, a memorial stone was laid in full Masonic ceremony on March 1, 2011 at the new School of International Service building.

The Masons of American University Lodge are working closely with members of The Colonial Lodge #1821 at George Washington University to build off of their great success since being consecrated in 2009. Anyone interested in joining or supporting the Lodge should contact the DC Grand Lodge Offices at 202-686-1811 or by email at grandlodge@dcgrandlodge.org