The Fifth Annual Masonic Restoration Foundation Symposium will be held at the Cincinnati Masonic Center on August 15 – 17, 2014.  This national symposium will feature speakers and workshops focused on enabling Masons and Lodges to improve their Masonic experience.

This year's Symposium will be jointly hosted by four Lodges:  Lodge Vitruvian No. 767 (IN), Caliburn Lodge No. 785 (OH), Arts & Sciences Lodge No. 792 (OH) and Lodge Ad Lucem No. 812 (PA).  They represent the full spectrum of observant Lodges - from European Concept to Traditional Observance.

The support of the Grand Lodge of Ohio and the Scottish Rite Valley of Cincinnati are gratefully acknowledged! 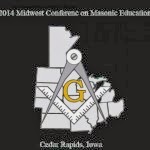 From the Associated Press:

A group of Freemasons is trying to restore a Masonic Temple in Franklin, Tennessee that they say was the first three-story building constructed in Tennessee. Craig Feldner, who is leader of Hiram Lodge No. 7, told The Tennessean newspaper that he hopes the building’s importance to the city and to U.S. history can drum up enough interest to save it. The temple is listed on the National Register of Historic Places and is the place where President Andrew Jackson met with Chickasaw leaders in 1830 and the Native Americans signed a treaty giving up their lands. “We think there’s as much history here as the Carter House or Carnton Plantation,” Feldner said. The Freemasons are trying to raise about $4 million to renovate the entire building, including the third floor, which has been declared off-limits by city inspectors due to concerns about structural soundness. “Our goal with this renovation is not to do patchwork but to make it last another 200 years,” Feldner said. If the Masons can restore the building in Franklin, they hope to change the perception of Freemasons as secretive and encourage more people to learn about the history of the meeting hall.

The Institute of Masonic Studies and the History Department at the University of California, Los Angeles will host the Third International Conference on Freemasonry on March 22, bringing together a panel of prominent Masonic scholars covering unique perspectives on Freemasonry, Aesthetics, and Civil Society.
Open to the public, this event seeks to educate and inspire scholars of the craft with discussions exploring the history of how Masonic aesthetics have impacted architecture, politics, and international societies.
Register here or contact Asst. Grand Secretary James Banta.
This year's presentations include:
at 2/08/2014 No comments: Links to this post

Has the Voynich Manuscript Been Deciphered? For decades, researchers have been trying in vain to decipher ancient texts written on the Voynich manuscript - yet they may have been looking for inspiration in the wrong place.

A U.S. botanist studied illustrations of the plants throughout the 15th century book and pinpointed a number of them to the Central American region now known as Mexico.

Dr. Arthur Tucker claims at least 37 of the 303 plants would have grown in the region during the 15th and 16th century and believes the text is, therefore, written in the Aztec language of Nahuatl.

The Voynich manuscript was discovered in an Italian monastery in 1912 by book dealer Wilfred Voynich.The writing is so bizarre, sceptics have stated the book is a hoax or that the writing is nonsense.

Carbon dating suggests the manuscript was created between approximately 1404 and 1438, during the Italian Renaissance.


For more, see the Daily Mail.