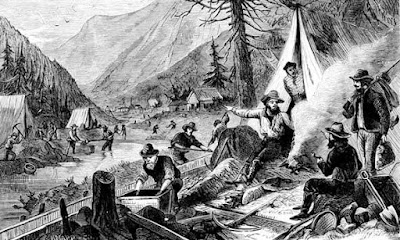 The Grand Lodge of California has just released a brand new coffee table-sized book of its history just in time for the holidays, Masonic Gold chronicles the history and development of twenty Masonic lodges in California’s Mother Lode country, spanning more than a century and a half from the Gold Rush through the 21st century.

It's been written and created by Grand Master John E. Trauner, who is a member of Madison Lodge No. 23, in the heart of Gold Rush country. 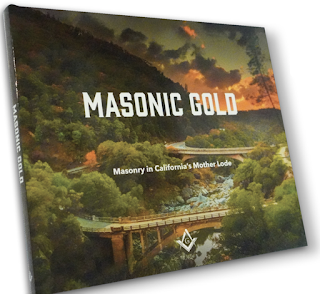 Learn about the colorful miner Masons who helped develop the Grand Lodge of California and formed the backbone of the state—men like Edward Myers Preston, the father of the California’s most famous reform school; James Graham Fair, the railroad and mining magnate; Bull Meek, the legendary stagecoach driver and Wells Fargo agent; and even Benjamin Thorn, the county sheriff who nabbed Black Bart. And, of course, there was that young upstart writer who went by the name Samuel Clemens.

All of them were Gold Country Masons, pioneers not only within the fraternity but also towering figures of business, culture, and politics that reshaped California and the world...

The limited-run, 8×10 inch book is 164 pages of engrossing photography, storytelling, and profound connections to a singularly proud heritage shared by all California Masons.

I haven't had a chance to see the book yet, but it has a great connection to us Indiana boys. In 1849, the Grand lodge of Indiana issued a dispensation to a group of Masons in Lafayette, Indiana for the creation of a traveling lodge called Sierra Nevada Lodge, U.D.

On March 27, 1849, ten of those brethren climbed onto a flat riverboat on the Wabash River and made their way downstream to the Ohio and Mississippi Rivers, and beyond, to eventually join the California gold rush. 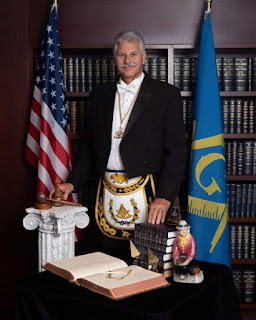 Indiana’s Sierra Nevada Lodge U.D. reported having seventeen members in 1850, and became a founding lodge of the Grand Lodge of California in April that year. It was granted a California charter as none other than current Grand Master Trauner's own Madison Lodge 23 in Grass Valley, California on May 4, 1852.

(Sierra Nevada Lodge was actually one of two traveling lodges authorized by Indiana to work under dispensation on the trip to and from California. The second was San Francisco Lodge U.D., but they made no further report.)

The history of the California Gold Rush and the 49ers really is the history of the founding of the Grand Lodge of California. Of the first 101 lodges chartered by the newly formed Grand Lodge of California between 1850 and 1856, an incredible 54 of them were established around Sacramento and all along the 150-mile Mother Lode region. An enormous number of the flood of eager miners headed West to strike it rich were Masons from other states, and many carried traveling charters from states back east like Indiana, Maryland, Wisconsin and more.


Because this is a very expensive book to create on a limited printing basis, the Grand Lodge of California is offering it at $50, or one of a limited number of copies autographed by Grand Master John E. Trauner (photo right) for $100.