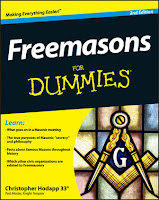 I just received news from Wiley Publishing that Freemasons For Dummies is coming soon in Portuguese and Conspiracy Theories and Secret Societies For Dummies is to be translated into Turkish. It's always fun for Alice and me to see the books in foreign languages, and they join the French, Dutch and German editions of Freemasons.

We are leaving tomorrow for a writers convention in Albany, New York, and then on to the Quarry Project in Alexandria, Virginia the following week. It's going to be a long and exhausting two weeks on the road, but should be fun.
Written by Christopher Hodapp at 9/17/2013