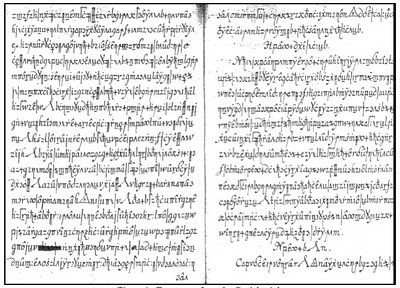 From a story on Lookout by Liz Goodwin:

The "Copiale Cipher" was neatly hand-written in Greek and Roman characters with some unknown symbols thrown into the mix. Researchers suspected that the original language was German, since the manuscript was found in Berlin, but they tried to match the manuscript with dozens of languages by running different "computer attacks" on the code, all to no avail.

As they explain in their paper, the researchers' first theory was that the Roman letters contained the true message, with all the other characters serving as distractions, or "nulls." It turned out their hypothesis was completely wrong. After running the cipher through the computer program, the researchers realized that their assumption was backwards--that the Roman characters were, in fact, the nulls.

Even after the code-breakers found and translated most of the unknown characters into letters, a handful of symbols remained mysterious. The researchers believe that these symbols stand for top-secret people in the society.

The manuscript described how to initiate new members into the society and other rules.

The complete report can be read here.

The translation from German can be read here. 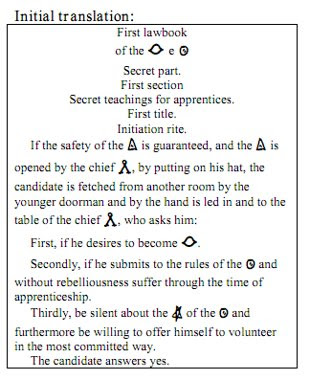 The initiation includes plucking hair from the eyebrow of the candidate. Really?