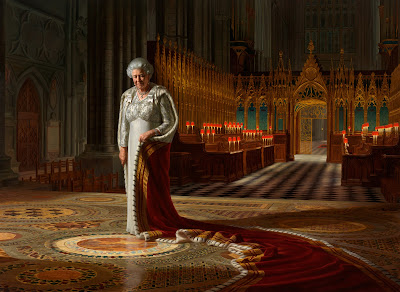 by Christopher Hodapp
I was in the midst of composing a message tonight about the passing of Her Majesty Queen Elizabeth II at the age of 96. But I just saw this Facebook post by RW Glen Cook, Past Grand Master of Utah, and I think he stated it perfectly:

On the passing of Her Majesty:

From a general sense, she was likely the most well known daughter and wife of a Mason; a family member of grand masters. A Mason crowned her. A Mason will be present at the Accession Council of King Charles. She was a friend of the fraternity, and intimately connected with the fraternity.

Masons throughout the world are members in the national grand lodges of the nations over which she reigned. I suspect she has been the ruler for more Masons than any person in history. We have toasted her innumerable times after our convocations. We have asked God to bless her in song.

Now, we shall do so with a new sovereign.

It is for many of us, a signal event in our lives as Masons.

It is also a personal grief. We have lost someone for whom we had great affection. Many have served in her armed forces and held honours at her approval. A senior English Mason and RN officer texted me this morning expressing his grief. We had both already lowered our flags to half mast in respect.

It is an end to a constant in our individual lives.

It is, indeed. Consider that you have to be over the age of 74 to have known a world without her as the sovereign of Great Britain. For our Canadian brethren, consider that she reigned for almost half of that nation's history after its official creation in 1867.
I wonder if we will begin referring to her time on the throne as the Second Elizabethan Period. Even stranger, I wonder if when the new King Charles ascends to the throne if we'll begin referring to a new Carolean Age.
How curious it is that news reports and commentators all day kept using terms like timeless, honor, faith, strength, responsibility, service, selflessness, devotion to duty, prudence, justice, fortitude, temperance — all those qualities it's been so fashionable to mock in Western society over the last 30 or so years that suddenly seem so important, so admirable, so needed, now that we abruptly live in a world without her example.
Requiescat In Pace.
And long live the King.
Christopher Hodapp at Thursday, September 08, 2022
Share