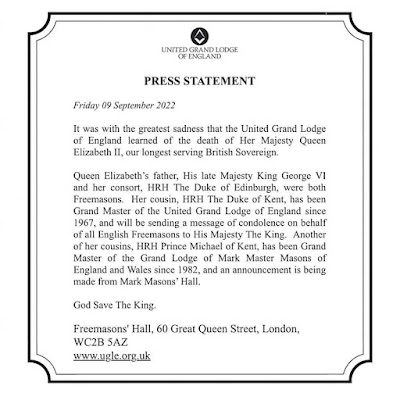 by Christopher HodappFollowing the death of Her Majesty The Queen, the United Grand Lodge of England has issued a statement to the press (photo above - click it to enlarge).
The UGLE's Metropolitan Grand Lodge in London issued the following directives to their members:

Following the death of Her Majesty on 8 September, the following measures will apply:

The Grand Lodge of Scotland has issued the following statement Friday morning:

I am writing to you following the passing of Her Majesty The Queen. Our thoughts and prayers are with The Royal Family at this sad time.
I wish to inform you that a period of national mourning has now commenced and will continue until the funeral of Queen Elizabeth II. The funeral, I understand, will take place on Monday 19 September 2022.

As a mark of respect the Grand Master Mason has directed that all Masonic activity will cease during this period of national mourning.
Further details will be circulated on Friday 9 September 2022.