by Christopher HodappThe Fox Nation streaming service today premiered a new 30-minute program, Freemasons: A Society of Secrets, featuring Fox personality (and barbershop quartet singer) Tom Shillue.
The show features interviews with Pennsylvania Brother Salmon Sheikh and Grand Master Jeff Wonderling at the Philadelphia Masonic Temple, and Grand Archivist Arturo DeHoyos at the Scottish Rite SJ's House of the Temple.
(Curiously, either the time period was too short or the editors didn't think it was important to point out just what the Scottish Rite is and how it's different from the local lodge brand of Masonry, so the audience is left baffled about Masonry and Supreme Commanders and the House of the Temple's sanctum of its Temple Room.) 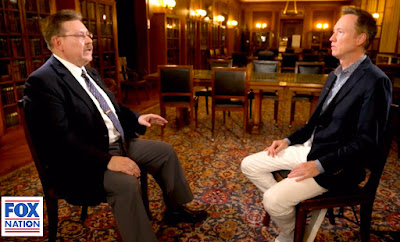 It's mostly benign, superficial ('C'mon, show me the handshake!'), and apart from a brief attempt to gin up a little controversy over Brother Sheikh's short period of resignation over anti-Muslim insults in his first lodge, the show ultimately does no harm.
Not really worth signing up for a month of Fox Nation just to see this one, but it's at least good natured. Or to borrow the expression from the Encyclopaedia Galactica, "mostly harmless."
See it HERE.
Christopher Hodapp at Monday, August 15, 2022
Share