Monumental Sphinxes at Scottish Rite's House of the Temple in D.C. Damaged By Vandals 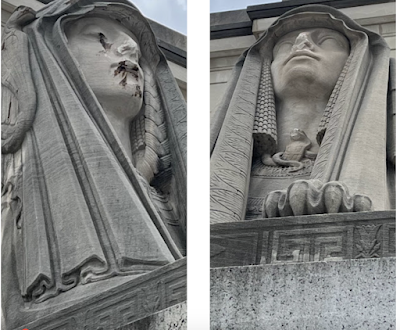 by Christopher Hodapp
Arturo De Hoyos at the Scottish Rite (SJ) House of the Temple in Washington, D.C. reports that the two monumental sphinx sculptures flanking the entrance were vandalized sometime between Thursday night and this morning.
From Art's Facebook page:

Two years ago today (June 3, 2020) I reported that vandals spray-painted ”BLM” and “FTP” on the House of the Temple.

Today, however, I have sadder news to report. Vandals severly damaged the two symbolic sphinxes which grace the sides of our front outer steps. They not only broke pieces from their faces, but smeared them with filth.

The sphinxes were carved, on site, by master sculptor Adolph Weinman, who was also a US coin designer and engraver. He’s best remembered for creating the Mercury Dime and Walking Liberty Half Dollar.

Art is correct – the sphinxes were doused with paint during escalating demonstrations and rioting across the U.S. two years ago this very day. That same week, several Masonic buildings throughout the U.S. and Canada had been hit with paint, suffered broken glass doors and windows, and several arson attempts. 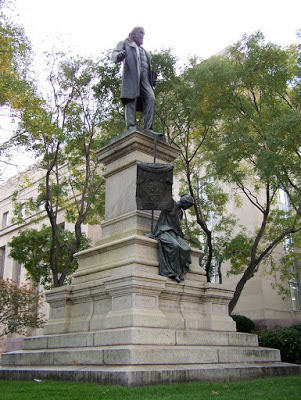 Less than three weeks later, on June 19, 2020, the iconic bronze statue of Albert Pike in Washington D.C.'s Judiciary Square was toppled by rioters, covered in paint, and even doused with lighter fluid and ignited.
Pike's statue had first been erected by the Scottish Rite SJ across from the location of their original 'House of the Temple' headquarters. For thirty years, protesters and the press characterized Pike's sculpture as a "Confederate monument," despite the fact that it was never anything of the kind. His statue was not erected by pro-Confederate veterans groups, or by alleged Ku Klux Klan members (it predated the 1920s resurgence of the KKK by many years). The 11-foot tall bronze sculpture by Italian artist Gaetano Trentanove was erected in 1901 and donated to the city by the Scottish Rite Southern Jurisdiction to commemorate their own 100th anniversary. It's location marked the former home of the AASR's headquarters for its first 90 years. 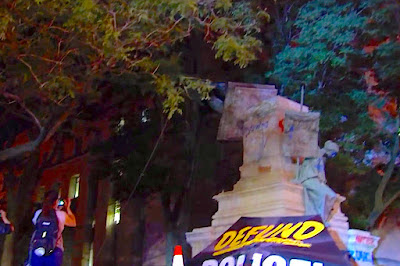 Pike was sculpted in civilian clothes, and there were eight inscriptions on its granite base describing his accomplishments: Author, Poet, Scholar, Soldier, Philanthropist, Philosopher, Jurist, and Orator. On the front was a Latin phrase, Vixit Laborum Ejus Super Stites Sunt Fructus. ("He has lived. The fruits of his labors live after him.") Detractors objected to it on the grounds that Pike had owned several slaves when he lived in Arkansas, and served for just five months in the Confederate Army before resigning in disgust, making it the only statue of a "former Confederate soldier" in the District. But the sculpture did NOT depict him as a Confederate soldier.
There were no references to the Confederacy, only that Pike had been a "soldier" and the banner in the hand of the Grecian figure is not a Confederate flag or symbol, but a Scottish Rite one featuring the double-headed eagle. It was purely a Masonic statue and an homage to his life's many accomplishments. Nevertheless, it was felled by the mob and hauled away to an unspecified location by the District's Parks Department. 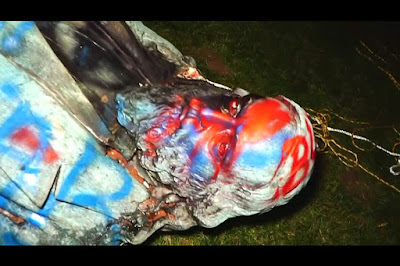 If anyone happens to know one single person whose life was improved in any way as a result of the destruction of Pike's statue, please let me know.
And the same is true concerning the defaced House of the Temple's sphinxes now. Whom did that help? What imaginary blow against equally imaginary tyrants did that strike?
I will admit, in passing, that there MAY be a twisted, paranoid connection some miscreant cooked up in his mind to justify attacking the sphinxes on this particularly date. More than 120 of the globe's most elite leaders from politics, business, big tech, media, and academia are convening in Washington for the notoriously secretive 68th Bilderberg Meeting from June 2 to 5th. Conspiracists have long perpetrated the shaggy dog story that the Bilderbergers are a secret society of ultra-elite Freemasons who control the levers of government and industries throughout the world. (Never mind that they issue to the press the list of invitees every year, along with the conference's agenda topic headings). Members in the group exchange information (studies, reports, demographics, surveys, etc.) and they aren't forbidden to talk about any of it. The only restriction is that they may not publicly disclose the exact source of their specific information.
Plenty of conspiracists claim that these meetings are where the "New World Order" was planned and set in motion. To be fair, the first proposal of the current European Union, and the conversion of European nations' myriad currencies into the Euro really were hammered out by Bilderberg attendees.
(I do wonder if they serve "New World Hors d'ouvers" at their cocktail parties.)
Unfortunately way too many conspiracy peddlers sloppily smear together the Freemasons, the "Illuminati", the Bilderbergers, the Conference on Foreign Relations, the Trilateral Commission, the Bohemian Grove, and the United Nations into one big fat group of invisible puppeteers running everything. Heck, even Yale University's Skull and Bones Society gets stuck with being on the list.
Christopher Hodapp at Friday, June 03, 2022
Share