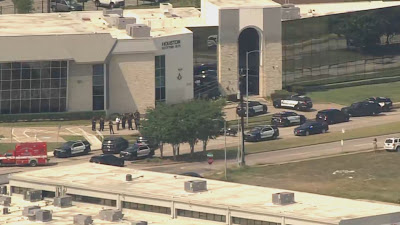 by Christopher HodappNOTE: THIS STORY HAS BEEN UPDATED AT 1:20PM CT.
Houston, Texas police have arrested an armed man at the Houston Valley of the Scottish Rite after it was reported he was holding two hostages inside.
Police hostage negotiators and SWAT team rushed to the Rite in the southwest part of Houston just after 10:00AM local time.  One of the hostages was a 91-year old man.
In a live statement from the scene following the arrest, officer L. J. Satterwhite said that the suspect "appeared to be of middle-eastern descent" and "in his 30s," but added that has not been confirmed.
According to the police statement, the suspect had attempted to enter the Scottish Rite building "to talk to them about their belief systems." Witnesses told police that he was "behaving erratically." When he was denied entrance, he circled the building and broke a window to get inside. It was originally reported to police that a female inside reported she heard four gunshots, but it was determined that the sound was that of the breaking window. He was not armed with a firearm, but used a screwdriver to threaten the hostages and a tire tool to break the window.
The only known injury was the elderly hostage who was hurt in the hand during a physical confrontation with the suspect.
The story has been covered by local station KHOU-TV 11.
Updated KHOU report.
H/T Roberto Sanchez
Christopher Hodapp at Monday, June 27, 2022
Share