The Freemasons of TikTok 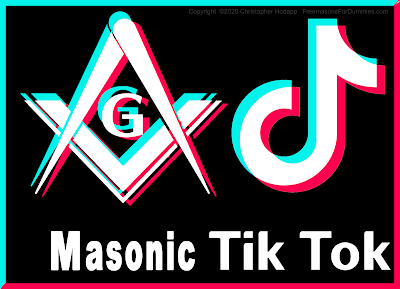 by Christopher HodappUPDATED May 28, 5:00AM: This story has been corrected. I mistakenly said that Tyler McKenzie is from Texas. He is actually a Mason in New Mexico.
Interesting article this week on the Input Magazine site about Freemasons using TikTok to counter hysterical conspiracy theories and other misinformation about the fraternity. The article "TikTok’s Freemasons are battling the haters and conspiracy theorists" by Jessica Lucas highlights Brothers Tyler McKenzie from New Mexico ("@harp.o.crates"), Zak Wyatt from Texas ("@brotherfluffmm"), and Aidan Mattis from Pennsylvania ("@theaidenmattis").
If you're over the age of 40, you've probably only heard of TikTok's reputation as a social media phenomenon favored by teenaged girls, dance party ravers, and Chinese intelligence services, along with its perpetuation of stunts, tricks, giggly kids making goofy faces, and viral "challenges" ("Take the Best Braless TikTok Girlz Dance Challenge!" or "Does This Make My Butt Look Big? Challenge"). Indeed, their most recent demographics show that 41% of all users are between 16 and 24. Appealing to short attention spans through brevity is the name of the game on nearly all social media these days: think of Twitter's original 64 character limit or the rise of the text message acronym 'TL;DR' ("Too Long; Didn't Read" - I get a lot of those reactions to my posts). Instead of typing out messages, TikTok is all video-based, and users create short video snippets between 15 seconds (!) and 10 minutes long.
We used to call that "Short Attention Span Theatre."
Deride it if you like, but TikTok has over 100 million regular users in the U.S. alone, and another 23 million in the U.K. And in what is inevitably the next step in attention deficit communication, the use of TikTok videos to replace written employment resumés for job seekers is beginning to gather momentum (which will of course lead to HR managers' making snap visceral reactions: "Ugh! Lookit that guy's SHIRT! Gross! Don't hire HIM!").
Anyhow, the brethren cited in the article are TikTok warriors fighting the enormous pile of anti-Masonic screeds that appear on the service day in and day out.

Ultimately, TikTok Freemasons stand steadfastly behind their organization of choice — and think their videos are changing things for the better. “There’s always going to be the negative person. The troll. The hater. But I honestly think we’ve overcome it now,” says McKenzie. “If you went on TikTok a year ago and you typed in Freemasonry, you would find nothing but conspiracy theories.

“But now, you’ll find this fuzzy face and a whole bunch of other brothers that are ready and willing to give you light, truth, and knowledge,” says the impressively bearded McKenzie. “It’s brought so many to Masonry, and I think that it’s going to help us grow.”

These brethren have a big job to counteract the anti-Masonic stuff that litters TikTok. For every one of their positive messages there are dozens of the "Lookit all the sooper secret Illuminati Mason symbols hiding in plain sight!" imbeciles.
Read the whole article HERE.
Meanwhile, from the Stray Ferret website in Britain:
In an effort to bring the fraternity into the modern era and attract younger members, Freemasons in Yorkshire are attempting to become TikTok famous.
The Province of Yorkshire West Riding has posted two videos on its new account – @wrfreemasons – including a take on the staircase scene from Titanic, set to Celine Dion’s My Heart Will Go On. CLICK HERE.
UPDATE:
When I circulated this story on Facebook, Zackery Wyatt provided the following figures about a video post:

"Almost 2,500 viewers tonight, and at least 50 men asked how to find a lodge. Will they petition? Maybe, maybe not, but the first step was definitely made."

Pretty impressive reach for a single post in a very short time.
Christopher Hodapp at Wednesday, May 25, 2022
Share