The news comes on the opening day of the 67th Templar Triennial Conclave in Indianapolis today.

At the annual communication of Louisiana earlier this year, their Grand Lodge voted to expel Past Grand Master 2012-13 Frank N. DuTreil, Jr. (photo) from the fraternity. (He had been previously suspended in June 2017, according to their 2017 Annual Proceedings, which is easily available online. The suspension was overturned in July 2017 by vote of the GL, and DuTreil was subsequently reprimanded.) However, according to reports out of Louisiana over the weekend, Knights Templar Grand Master, Most Eminent Duane L. Vaught and the Grand Encampment allegedly did not honor that expulsion, and permitted DuTreil to remain, not only a Sir Knight, but to continue serving as the Department Commander for the South Central Region.


DuTreil was reportedly permitted to attend the Triennial's public events today and was introduced during the opening this morning. This was clearly seen as an affront by the Grand Master of Louisiana.

Longstanding practice in the regular, recognized Masonic world is that an expulsion from a Mason's home jurisdiction is to be honored by the appendant bodies, and the member be likewise expelled from all Masonic groups.

A similar impasse occurred many years ago in Arkansas when the Shrine failed to honor an Arkansas Mason's expulsion in that jurisdiction. The result of that action was that the Shrine to this day is no longer affiliated with or recognized by the Grand Lodge of Arkansas, and Masons in that state are not permitted to be Shriners. Hopefully, this current imbroglio with Louisiana and the Knights Templar won't become that  drastic.

In MW Reinschmidt's Edict, he quotes Section 202 of the Constitution of the Grand Encampment:

The Triennial continues in Indianapolis this week, and election results of new officers will be announced soon. Rather than wait a few days for the election of a new Grand Master of Templars, the GM of Louisiana chose to take the nuclear option, which is certainly his right. Appendant bodies are subordinate to the grand lodge within a jurisdiction, so this was a pretty cut and dried decision on his part.

The Edict does carefully point out that Louisiana Commanderies CAN continue to operate, as long as they are not holden to the Grand Encampment. This is the result of the fact that Louisiana's first Knights Templar commanderies did not receive their original charters from the Grand Encampment of the USA, but from pre-GEKT New York sources. But I will leave that explanation to others far better versed in this minutiae than myself. (Besides, Louisiana Freemasonry ALWAYS turns into an argument when their origins are discussed...) 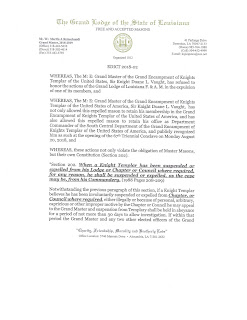 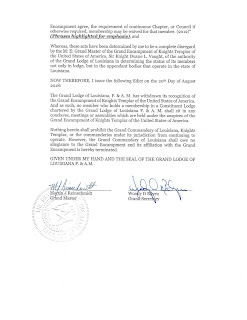 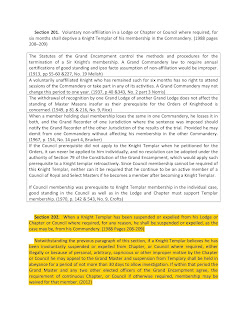 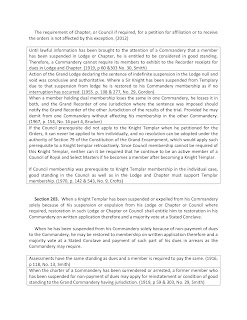 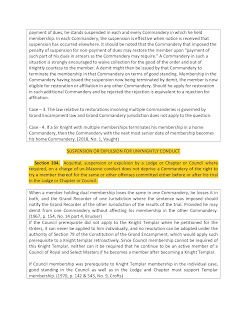 By the way, in other news, Pete Normand reminded me that today, August 20th is the Feast of St. Bernard of Clairvaux (1090-1153), patron of the Knights Templar. 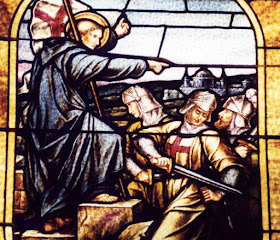 I spoke by phone this afternoon with Most Eminent Grand Master Duane L. Vaught of the Grand Encampment. I have offered to post any statement or rebuttal that he, the GEKT, its grand officers, or its legal counsel wish to issue, in full and without any opinion or commentary on my part. With the Triennial continuing to dominate their attention this week - along with my own erratic posting schedule while on the road this month - that may not be immediate. But if they choose to do so, I will post it on this blog in as timely a manner as I am able.

I have just posted MEPGM Duane Vaught's response to this blog entry, along with supporting documents by him.

Colorado Knight Templar (and law student) Ben Williams has posted an extremely detailed delineation on the Rocky Mountain Mason blogsite of the incidents and actions leading up to DuTreil's original suspension and ultimate expulsion from the Grand Lodge of Louisiana.Williams is arguing that DuTreil could NOT YET be expelled from the GEKT because due process hadn't been followed.

See: Why the Grand Lodge of Louisiana Should Reinstate Recognition of the Grand Encampment of Knights Templar
Christopher Hodapp at Monday, August 20, 2018
Share