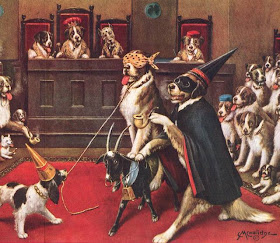 "Suddenly a loud voice exclaimed, ‘Prepare the Goat!’ and a large black and white goat was led forward. This caused me but little fear, as I had often heard that it was part of the ceremony. I was immediately mounted upon him, and told to hold by his horns, but no sooner had my conductors released their hold upon me, than I found myself thrown upon the floor, the goat having precipitated me over his head; at this a general laugh issued from those in the room."

It came up over the weekend during a conversation with someone who spotted my Masonic jacket in the grocery. And no, I was not stocking up on milk, bread, and toilet paper for the nonexistent, media-hyped "Icepocalypse" that didn't happen.

We actually have a DeMoulin Brothers & Company mechanical goat specimen at the Masonic Library & Museum of Indiana at Freemasons Hall in downtown Indianapolis, so it was also the subject of comments from the many Masonic visitors we had Saturday. Even plenty of Freemasons wonder just where the Hell this moronic urban myth originated.

I was poking around online tonight and came across my friend William D. Moore's 2007 outstanding article, Riding the Goat: Secrecy, Masculinity, and Fraternal High Jinks in the United States, 1845–1930. Will probably got tired of wondering too, so he went and found out, hopefully laying this damn subject to an exhaustive rest.

The historical link between fraternal goat riding and witchcraft is troublesome. The mecha- nism by which the concept was transferred from seventeenth-century Europe to nineteenth-century America, if it exists, has not been adequately ex- plicated. Although Thomas A. Foster recently has identified references to sodomy and homoeroticism in an American anti-Masonic satire of the mid- eighteenth century, he does not factor goats into his analysis or indicate that they appear in his sources. Similarly, hoofed and horned ungulates are not featured in the multitude of anti-Masonic writings published in the United States during the 1820s and 1830s. The evangelical and political enemies of early nineteenth-century Freemasonry accused the fraternity of numerous transgressions, but carnality in the form of riding goats did not appear on their lists of indictments.

The anti-Masonic movement of the early nineteenth century had a deleterious effect on fraternal organizations in the United States. Because they were accused of promoting aristocratic and unchris- tian ideals, Masonic lodges all across the country simply stopped meeting. Pressure from evangelicals during these years similarly induced the members of Phi Beta Kappa to transform their organization from a ritual brotherhood into a scholarly society.

The Odd Fellows, however, who, like the Masons, practiced secret initiation ceremonies, prospered during the 1830s and gained public approval, stat- ure, and membership in the 1840s.23 By 1845, 686 Odd Fellows lodges contained a total membership of 61,853 members and exhibited exponential annual growth. The organization’s success motivated a number of evangelical and radically democratic in- dividuals to publish pamphlets in the second half of the decade decrying what they described as the organization’s sins, errors, and ceremonies.

Anti–Odd Fellow publications of the 1840s con- tain the earliest references to the lodge goat yet located. The anonymous Odd Fellowship Exposed, published in Exeter, New Hampshire, in 1845, for example, describes a horrific, if probably inaccurate, initiation process in which the poor candidate’s ce- remonial guides repeatedly utter the menacing phrase ‘‘Secresy [sic] or death.’’ The text of this pamphlet [quoted at the beginning of this post] deserves attention because it provides insight into how the idea of the lodge goat developed over time...

Then go have a look at the 1916 cartoon, Bobby Bumps Starts a Lodge. All the standard hysterical trigger warnings about cultural stereotypes of the period apply.


(Thanks to the Phoenixmasonry.org online Masonic museum website for hosting the article.)