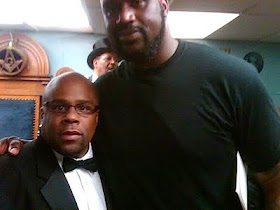 On the heels of the news yesterday about Brother Richard Dreyfuss, Brother James Morgan reports that the Grand Master of the Wost Worshipful Prince Hall Grand Lodge of Massachusetts F&AM, M:.W:. Frederick B. Summer, has made Shaquille O'Neal a Prince Hall Mason at sight on Saturday.

Brother O'Neal is now a member of Widow's Son Lodge No. 28 in Boston.

His legendary status in basketball is well known. Since 1992, he has played for six NBA teams: the Orlando Magic, the Los Angeles Lakers, the Miami Heat, the Phoenix Suns, Cleveland Cavaliers, and the Boston Celtics.

Brother O'Neal graduated from Louisiana State University, and he holds an MBA from Phoenix University. He's currently pursuing a PhD in Leadership and Education at Barry University. Influenced by his step-father's military background and devotion to service, Shaq has made public service a priority in his life, making untold donations to charities and organizations across the country, and even working as a reserve police officer in Los Angeles, Miami, and Phoenix. He has recently formed a business venture in Orlando to help homeowners avoid foreclosure.

Photo by Bro. "Dizz" Mikael Kwame Cooper. Can anyone identify the brother in the photo on the left? 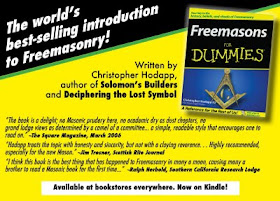