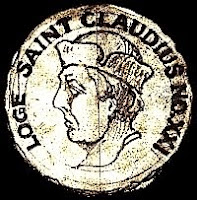 On January 6th, 2011, St. Claudius Lodge No. 21 was reconstituted by the Grande Loge Nationale Française. Originally founded on October 31, 1925, St. Claudius Lodge was the first Masonic research lodge chartered by the GLNF. It is named after one of the "four crowned martyrs," and patterned after Quatuor Coronati Lodge No. 2076, England's premiere lodge of research. Its purpose was to study the history of Freemasonry, especially in France, but its mission was cut short in 1939 as war spread across Europe, and the Nazi occupation made Masonic activity a dangerous pastime.

According to Jiri Pragman at Blog Maçonnique, "The lodge will be responsible for research work in a scientific spirit, the history of Freemasonry, based on archives and documents to enhance the specificity of the GLNF in the French Masonic landscape, and to reaffirm the importance of a common formation for all the brethren who must always prevail over the membership of any particular [obedience]."

Regular monthly meetings are planned, along with four annual conferences on historical topics, under the guidance of GLNF Grand Archivist Francis Delon, who has overseen the regular publication of research papers in Les Cahiers Villard de Honnecourt for the last ten years.