The Grande Loge Nationale Française' (GLNF) Grand Master, François Stifani, continues to battle opponents within his obedience. Now they have taken their complaints to the Tribunal de Grande Instance of Paris, The TGI is the French equivalent of the civil court system in the U.S., which settles disputes between individuals, corporations and associations.

From La-Croix.com (any translation errors are mine and Google's): 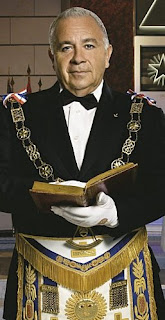 Freemasons: Judgment against the Grand Master of the Grand Lodge, who is appealing.

The Tribunal de Grande Instance of Paris has ordered the current Grand Master of the Grande Loge Nationale Française (GLNF), Francois Stifani, to convene a general meeting which will [consider] his dismissal, his representatives announced on Friday.

The TGI gave its judgment on Tuesday and Mr. Stifani appealed.

He had been sued by [his opponents], who criticized his method of governing as too personal and opaque in its accounting and decisions. They felt that the last such meeting was not consistent with their statutes, and the district court ruled in their favor.

It serves notice on the current Grand Master to convene a new General Assembly that will [audit] the 2009 accounts, establish a new budget, and decide on the dismissal of the Grand Master.

On Friday Francois Stifani informed the members of the obedience in writing of the ruling, saying that "the Board of Directors of the GLNF, meeting on December 10, 2010, notes the decision of the Tribunal de Grande Instance of Paris on December 7, and its enforceability." The Board decided to "unanimously appeal the decision and request the suspension of the provisional order."

In March, the General Assembly had rejected the accounts and report of the GLNF. The Grand Master asked for an audit of the accounts of 2008-2009, which did not calm his opponents, who want the departure of the Grand Master and of the current Board of Directors (the majority of whose members are appointed by the Grand Master), an opponent told AFP under condition of anonymity.

The date of the judgment on appeal is not yet known.

The only obedience recognized by the United Grand Lodge of England, the Grande Loge Nationale Française is the second largest [French] obedience in number of Brothers (after the Grand Orient of France) and boasts more than 41,000 members and 1,700 Lodges.