Political History of African American Freemasonry in the Era of Emancipation 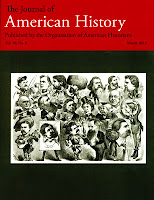 The March 2010 issue of the quarterly Journal of American History, published by the Organization of American Historians, features "African American Freemasonry in the Emancipation Era," by Stephen Kantrowitz. His position is that segregated fraternal organizations, especially the Freemasons, provided an institutional framework in which African American men gained experience in politics, organization and leadership in the years before the Civil War.

“Intended for the Better Government of Man”: The Political History of African American Freemasonry in the Era of Emancipation

Nineteenth-century black activists who achieved fame as abolitionists, public speakers, itinerants, Civil War recruiters, and Republicans very often shared another identity as well: Freemason. Stephen Kantrowitz argues that this ritual order, whose segregated lodges flourished from the 1840s onward, played an important but poorly understood role in the development of African American political life in the era of slave emancipation. Kantrowitz demonstrates that during the antebellum era Freemasonry allowed people excluded from most forms of partisan political life to vote, hold office, and establish bonds of affiliation across great distances. Both before and after the Civil War, white Freemasonry’s nominal commitment to universalism and cosmopolitanism offered black activists a forum in which to argue that racial exclusion violated basic Masonic principles and goals.

The opening of the article can be read here, and you can purchase a pdf file of it for $10.

The Organization of American Historians is the largest professional organization for the investigation, study and teaching of American History. It serves a membership of 11,000 college and university professors, high school teachers, students, archivists, public historians, and institutional subscribers such as libraries, museums, and history societies, as well as individual and institutional foreign members.
Written by Christopher Hodapp at 4/05/2010